For some time, Thomson Ecology has been exploring how to use unmanned aerial vehicles – UAVs, or drones – in an ecological context, as well as the benefits they could provide. For example, how can we reduce costs for our clients? How can we get better data? How can we survey large or inaccessible areas more efficiently? Can we show changes over time? The Knepp Wildland Project provided a fantastic opportunity to use a UAV at a large site in order to gather imagery and monitor landscape-scale dynamics.

The Knepp Wildland Project in West Sussex, is an innovative rewilding scheme that has seen around 1,400ha of formerly intensive agricultural land transformed into a revitalised lowland mosaic habitat.

Conventional, intensive dairy and arable farming was halted on the estate and free-ranging herbivores – red and fallow deer, Tamworth pigs, English longhorn cattle and Exmoor ponies – were subsequently introduced to shape the vegetation dynamics, along with the naturally occurring wild roe deer and rabbits. The low density of grazers – 0.25 livestock units per hectare – allowed that vegetation to develop. The project is process-led, with no specific biodiversity or ecological objectives as such; however, seeing whether the landscape develops into closed woodland or semi-open mosaic habitat is a key tenet of the project. 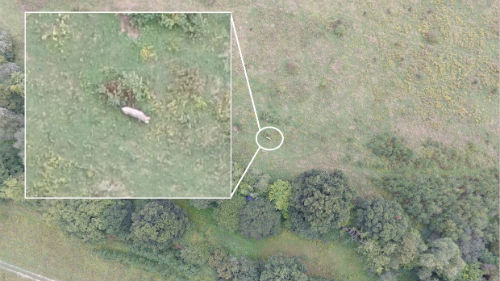 Figure 1: High levels of detail: the high quality of the imagery enabled us to identify some of the animals in the Wildland project, such as this Tamworth pig

Monitoring how the vegetation develops over time is a key part of the Knepp scheme. The population densities of herbivores have to be managed, so monitoring the effect of grazing and browsing is important. As well as this, relating biodiversity developments to developments in vegetation structure and composition could reveal important ecosystem connections.

Conducting large-scale monitoring with conventional field survey techniques is difficult and time-consuming. While traditional habitat surveys, transects and fixed-point photography can provide a high level of detail, these methods are impractical over a large scale. This is where we see the benefits of using a UAV.

From flying to data

We spent a day in the southern block at Knepp, gathering high-resolution imagery from the air. The UAV was set to fly at an altitude of 100m, to maximise the area that we could cover in the time available.

We captured imagery at a pixel resolution of 4cm, which is of a very high quality when compared to off-the-shelf aerial imagery taken from an aeroplane. The image quality was good enough for us to pick out distinct shrubs and even identify individual red and fallow deer, Tamworth pigs and some buzzards.

The area we recorded was just short of 2 sq. km and resulted in more than 3,000 overlapping images; these were run through processing software to georeference them accurately in a geographic information system (GIS). We also ortho-rectified the imagery, which entails removing the effects of perspective and relief and creating a planimetrically correct image with a constant scale that represents features in their true positions.

The software stitched the images together to create one seamless mosaic. This enabled the analysis of the recorded area in GIS, rather than having to assess each image separately. A point cloud was also produced, showing a 3D representation of the area, which enabled the viewer to explore the site virtually, from their desk. It also allows digital surface models (DSMs) to be created that represent the surface of the recorded area, including the ground, trees and any structures.

The UAV-led data becomes even more valuable when it is compared to data sets from the same site captured at different times, in order to ascertain the ecological development of a site. For example, have any types of habitat or vegetation grown or shrunk in area or percentage cover? Or has the height of any vegetation changed significantly?

We obtained satellite imagery from 2001 – before the rewilding of the southern block had commenced – as well as aerial photography from 2014. The difference in quality between our UAV imagery and the two off-the-shelf image sets was substantial, so we had to effectively downgrade our data in order to make a comparison. This allowed us to quantify how the general composition of the area had changed since the dairy and arable farming ceased and the Wildland project began.

By using UAV monitoring, the Knepp project’s managers could relate developments in biodiversity to those in habitat

As would be expected, in 2001 – before the rewilding of the southern block grassland – pasture and arable fields dominated the area, with scrub, hedgerows and woodland making up only 10% of our study site. In the 2014 data, the proportion of scrub and woodland had increased to 35%, while our 2016 UAV data showed that 45% of the area was now made up of scrub, woodland and hedgerows.

We were also able to quantify how the 3D structure of the vegetation had changed by comparing the DSM produced from our UAV imagery to that of an off-the-shelf DSM produced in 2014. We could see that the vegetation in one field had developed noticeably in that two-year period, with the scrub spreading and growing higher and denser. 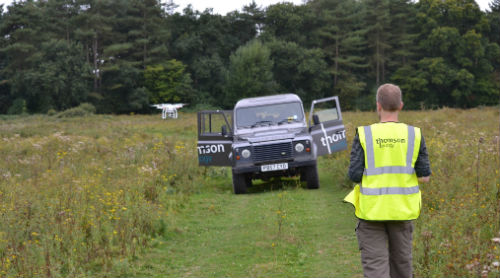 By using UAV monitoring, the Knepp project’s managers could relate developments in biodiversity to those in habitat. For example, Knepp is now a hotspot for the UK’s Purple Emperor butterflies as a result of the extensive sallow scrub in its southern block; this is the insect larvae’s food plant, and the females lay their eggs on the leaves. Being able to monitor the development of this scrub periodically could be invaluable for informing research on the success of the Purple Emperor butterfly at the site.

Similarly, this approach could have benefits for the monitoring of nightingales at Knepp. While studying for her master’s degree from Imperial College London, Olivia Hicks identified that nightingales on the site prefer overgrown hedges with a width of 8m or more at the base and the presence of protective blackthorn. Relating this information to the data gathered by the UAV could potentially allow large-scale mapping of possible nightingale habitat.

The Knepp Wildland Project is allowing natural processes to function, providing a space for natural complexity to develop, and this can in turn reveal the intricate connections that may otherwise be more obscure over the landscape scale. UAVs are providing us with a pragmatic and cost-effective way of gathering the high-detail data needed to monitor and explain these linkages.