When the Crossrail project is completed in phases from 2018, it will run 118 km from Maidenhead and Heathrow Airport, lying to the west of London, to Shenfield and Abbey Wood, to the east. It will link the West End, the City of London and Canary Wharf for the first time and increase the rail capacity of the capital by a tenth.

The Crossrail Act 2008 has legislative powers to dis-apply several pieces of legislation, including the Party Wall etc. Act, 1996; this follows the successful precedent of the Channel Tunnel Rail Link Act 1996.

The need to serve notices for the extensive excavations required by Crossrail prompted the provisions of section 6 of the Party Wall Act to be lifted under the 2008 act. Without this measure, party wall awards would have to be agreed with tens of thousands of owners along the route before any of the 21km of tunnelling works could commence or any of the station boxes could be constructed.

To convince parliament that the provisions of a key piece of protective legislation can be lifted in a particular case, there must be a robust alternative in place. The 2008 act outlines mitigating measures to protect buildings that are identified as being in areas at risk of high levels of ground settlement. 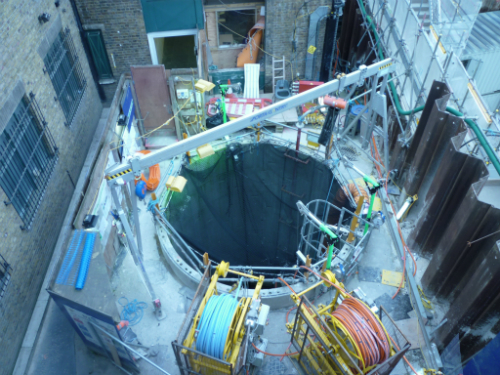 Areas of equal settlement, as assessed by geotechnical engineers, are often shown as contour lines on a plan, denoting a “zone of influence”. Different activities cause different kinds of ground movement; demolition may cause heave, while tunnelling with a boring machine causes a ripple effect, with the ground eventually settling according to the depth of the tunnel and the face area of the cutting shield. If the contour lines on the zone of influence drawing are close together, differential settlement is more likely to be in evidence, and it is this rather than actual settlement that causes most damage.

A schedule of condition was undertaken for all buildings that were estimated to be subject to 10mm or more of settlement, and owners of those affected properties had the opportunity to enter into a Deed of Settlement with Crossrail Ltd. Vulnerable buildings were also identified, assessed and categorised according to the risk of damage from predicted movement; those at a high risk were subject to further assessment as outlined in Crossrail paper D12.

Along the whole Crossrail route only one property, the grade II* listed 20 Hanover Square (figure 2), has a protective undertaking that effectively re-applied the Party Wall Act for all works that would normally require awards. The property will be adjacent to the new eastern ticket hall of Bond Street Station, and 18 and 19 Hanover Square were compulsorily purchased by Crossrail Ltd prior to their demolition. 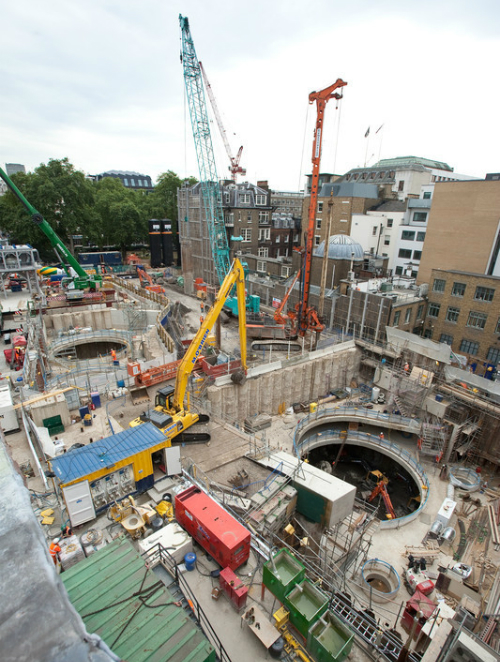 An in-depth structural assessment was carried out of 20 Hanover Square due to its proximity to the tunnelling works, its heritage status, its age and its construction. Following this assessment, it was considered prudent to follow the most stringent settlement mitigation practice, and a dedicated grout shaft was constructed in Dering Yard to the west of the property, from which controlled heave could be directed.

On this site, Crossrail’s work consisted of the following:

The site of 18 and 19 Hanover Square will be bought back by its previous owner for the development of a masterplan scheme that will include areas of public realm, commercial and retail spaces.

To phase the works and allow early access to the tunnels for subterranean work at other sites, extensive temporary access shafts were created.

A multitude of systems is available to 21st-century designers to ensure that complex civil engineering projects can take place in the world’s busiest cities without causing excessive damage to neighbouring buildings.

Baseline readings at 20 Hanover Square were taken for a year prior to demolition. Horizontal north–south (x axis), east–west (y axis) and vertical movement or settlement (z axis) of a building can be monitored using a wide range of equipment of varying precision. As demolition progressed and the party wall was exposed, reflective monitoring targets were fitted to the wall itself.

Additional monitoring was required for the excavation works. The full range of monitoring conducted on the adjoining building included:

Cracks were monitored with:

Vibration is not permanent movement – it terminates once the relevant activity stops – but the damage it causes can be permanent. Buildings can withstand a much higher level of vibration or peak particle velocity than people, who can experience feelings of nausea at very low vibration levels.

Demolition, particularly of concrete, can cause high levels of vibration, which can be transmitted to connecting buildings. To mitigate these effects, 20 Hanover Square was separated from 19 Hanover Square by stitch drilling the slabs to disconnect them from the walls and undertaking the works on a two hours on, two hours off rota, which gave some respite.

A proven method of limiting settlement is the use of compensation grouting. This methodology was successfully used in the Jubilee Line tunnel construction to prevent the collapse of the Elizabeth Tower at the Palace of Westminster, better known as Big Ben.

Grout is accurately targeted and pumped under pressure into the ground beneath the vulnerable building, causing controlled heave, but it can only be used in clay soils and underneath shallow footings and will not work on piled buildings. Shafts around 20m deep are positioned in the zone of influence.

Crossrail’s Bond Street Station had five grout shafts strategically positioned in the zone of influence in Davies Mews, Haunch of Venison Yard, Tenterden Street, South Molton Lane and Dering Yard (see main photo, left). Steel tubes up to 100m in length called “tubes à manchettes” (TAMs) were then arranged in a horizontal array like the spokes of a bicycle wheel around the central shaft.

Settlement was detected by the monitoring instrumentation and grout was pumped along the length of the TAM to the precise area where it was needed. There is an exclusion zone of about 5m adjacent to any piled walls; if grout were pumped under pressure too close, the wall could be breached.

Grout was pumped as a pre-treatment to mitigate predicted settlement levels; if necessary, it was pumped concurrently with the TBM’s passage beneath and also as a post-tunnelling operation, to lift the ground again once the machine had completed its pass.

The volume of grout to be pumped depends on the heave required. Beneath 20 Hanover Square, it was pumped in phases or ‘passes’ to allow the ground to assimilate the grout and avoid overheaving the ground, which could lead to building damage. The grout is a clay or mix of similar consistency to the clay into which it is pumped, and the aim is to heave the ground by no more than 1–2mm at a time.

Shirley Waldron is a senior surveyor at Delva Patman Redler