Trinity College Cambridge’s New Court is a grade I listed Tudor–Gothic building designed in 1823 and used as accommodation for students and fellows. In 2009, the college identified the need for refurbishment to meet contemporary expectations of comfort and utility and improve its energy efficiency. 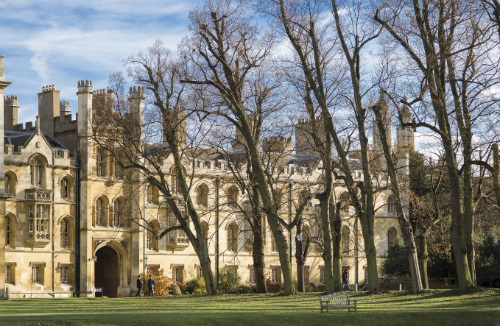 But there was little precedent for ensuring energy efficiency in such a highly protected building. A principal concern was avoiding moisture build-up in the refurbished fabric: if building elements were cooled by the installation of insulation and buildings were made more airtight, would infiltration, ventilation and evaporation cease to remove moisture effectively? It might accumulate on internal surfaces, or, less visibly, in structural elements, leading to damp and even mould, jeopardising health and leading to structural decay and rot. ArchiMetrics was charged with undertaking detailed building fabric performance monitoring to help identify areas of risk and inform effective design decisions. Its monitoring would work alongside modelling that was carried out by Max Fordham Engineers as directed by 5th Studio Architects, which was responsible for the refurbishment.

The first round of assessment included in situ U-value measurements and air pressure testing in eight sample walls. Moisture itself was assessed by interstitial hygrothermal gradient monitoring (IHGM), a technique that ArchiMetrics has developed specifically for looking at vapour in building elements. The findings from the U-value, air pressure testing and IHGM measurements were then fed into the design process.

Measurement of U-values for solid walls, or walls of indeterminate make-up, is important when refurbishing buildings of significance. ArchiMetrics’ previous work had identified a large discrepancy between U-values taken from traditional solid walls and those calculated for the same walls using standard industry protocols, which exaggerate heat loss, artificially inflating estimates of the energy, carbon and money to be saved if wall insulation is installed. This could encourage the use of excessive insulation and result in overcooling of fabric and an increased potential for interstitial condensation in the wall.

U-values measured from the eight walls at New Court ranged from 0.59 W/m2K to 0.78W/m2K, giving an average of 0.69W/m2K, a 25% lower heat loss than that suggested by the standard calculated U-value of 0.94 W/m2K. Similarly, an air permeability figure for the structure, of 11.0m3/h/m2 at 50Pa, was provided by an on-site pressure test, measured from the building itself rather than selected from a set of default assumptions.

IHGM was performed in the coldest part of the year; this is when walls are likely to be at their wettest, largely due to wind and rain but also fewer opportunities for evaporation coupled with low dewpoint temperatures. The findings were analysed in a number of ways, including the calculation of a saturation margin, which uses measurements of relative humidity and temperature to determine how close parts of the wall are to dewpoint. From a broadly representative sample, all walls performed well; no examples of persistent dewpoint conditions were found in any wall over winter, suggesting that some degree of internal wall insulation could be tolerated.

Further data from the monitoring was used to calibrate hygrothermal modelling software WUFI Pro 5.0. As with the energy models, customised input data for its simulations was used to reflect the actual materials in the walls and the influence of site-specific weather conditions. Materials testing was carried out by Glasgow Caledonian University to determine the properties of brick and mortar samples, rather than relying on database defaults. The hygrothermal behaviour of a virtual sample wall was compared with responses recorded over time from one of the monitored walls, and by altering the WUFI parameters, the engineers made the virtual wall’s responses closer to those measured on site. This was then used to run scenarios for a variety of wall insulation options.

The model found that the addition of 60mm of Pavadentro woodfibre board was broadly acceptable for the walls at New Court, with a slight increase in moisture risk for south- and west-facing walls. These risk assessments varied depending on the selection of different brick material properties for the modelled wall; the variety of types used had been an additional finding of the IHGM work.

Cores were removed from the wall to install sensors, and were then tested for moisture content and density. Because of the variety of brick types involved, it was decided that the best way to manage any remaining uncertainty would be via long-term on-site monitoring of the building fabric after refurbishment. This measures the thermal performance, hygrothermal conditions and material moisture content of the walls in study bedrooms, bathrooms, kitchens and service rooms. It also measures indoor air quality and hygrothermal conditions in rooms now fitted with mechanical ventilation with heat recovery systems.

Vulnerable materials such as built-in timber elements – lintels, bearers and joist ends, where high humidity or liquid moisture could represent a potential starting point for decay – were thought to be at the greatest risk from moisture build-up. Therefore, a network of resistivity probes were installed in specific embedded timbers exposed during the refurbishment to measure material moisture conditions.

Results from monitoring are incorporated into an online service allowing for real-time reporting of potentially adverse conditions. Data from the material moisture monitoring of both timber and masonry elements is stored locally and collected on a quarterly basis on site visits that also allow visual inspection, and an update on room conditions and building fabric is then provided to the design team. A more comprehensive observations report, including weather and U-value data, is submitted annually.

This monitoring programme is accompanied by a mitigation strategy, which sets out various interventions designed to ameliorate potential harm to the building or occupants, principally, persistent high humidity levels. Early U-value measurements from nine walls at New Court gave an average of 0.36W/m2K, very close to the 0.38W/m2K modelled figure. The interstitial hygrothermal analysis has largely shown walls reducing in humidity as the lime parge coat, which is applied to the wall before insulation, has dried.

Monitoring of New Court will continue for seven years, a time frame subject to ongoing review. The project could serve as a precedent for quantifying and managing the risks posed by the refurbishment of older buildings.