In UK cities, blocks of flats are still the easiest method of meeting demand for housing. By having them reach into the sky rather than spread out, developers are able to get the most out of the available space.

The 1950s and 1960s saw concrete housing blocks constructed all over the country, and we now seem to be seeing this trend repeated – albeit with better layouts and aesthetics, building on the significant advances in design and technology in the time since then.

The first Building Regulations also came into effect in the 1960s, and they have evolved over the years from prescriptive rules to take a more functional approach. However, even with the regulations’ current degree of flexibility, some developers claim that they are being prevented from making full use of the space available to them.

Blocks of flats, like all other residential buildings, need to comply with the current functional requirements of the Building Regulations. The easiest method of meeting these is to follow the guidance in Approved Document B: Volume 2 Buildings other than Dwellinghouses and BS 9991: Fire safety in the design, management and use of residential buildings – Code of practice.

For some high-end residential units bigger is better, and they work beyond guidance limits

Both of these documents are fairly prescriptive, and some architects and developers feel that they constrain what can be done with a flat. In general, the front doors of flats in the UK open on to a protected entrance hall, consisting of 30-minute fire-resistant construction, which are no lengthier than 9m. All rooms are accessed from this hall, and all doors in the hall are required to be of the FD20 fire-resisting kind.

Growing demand from investors, developers and customers has seen the introduction of the open-plan flat, however, in which bedrooms and other rooms are accessed from a main living area. Americans have long enjoyed such open-plan flats – one just has to watch a range of US TV shows to see that this layout is extremely common – and they are becoming more sought-after in the UK.

We have limited guidance on these open-plan flats. Work carried out by the Building Research Establishment (BRE) on behalf of NHBC in 2009, Open plan flat layouts: Assessing life safety in the event of fire, studied such properties and went on to influence BS 9991, which contains a section on them. 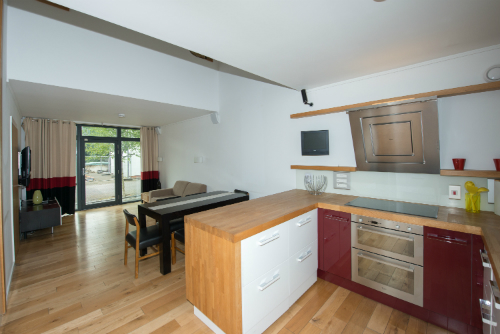 The guidance in BS 9991 only allows for open-plan flats of up to 12m x 16m, and requires residential sprinklers to be installed. For some developers, this may be sufficient size; but for some high-end residential units, bigger is better, and they need to work beyond the limits of the guidance. There also appears to be a growing demand for split-level flats as well as open-plan dwellinghouses in which the stairs are not enclosed.

What happens when the proposed open-plan flat is outside the scope of the guidance?

Building control bodies (BCBs) and approved inspectors still need to prove that open-plan flats which do not meet the relevant guidance still fulfil the functional requirements of the Building Regulations, namely those in Part B. What proof do they need that these flats are safe?

It seems that the common approach at the minute is to use computational fluid dynamics (CFD), by which fire engineers can create models that mimic conditions in the proposed flat, allowing BCBs to understand how safe the property is likely to be.

These models can either go down a deterministic route, demonstrating what is likely to happen for a given set of criteria, or they can take a comparative approach to show how the proposed flat measures against a code-compliant one, once more testing to a set of agreed criteria. These two options are valid ways of demonstrating compliance, as set out in BS 7974, but a combination of both can be used to help demonstrate to a BCB that the proposed design is safe.

The acceptance criteria should be agreed in advance between all parties. It should be noted that CFD models suffer from the “garbage in, garbage out” paradigm, where incorrect input parameters will produce incorrect results; the models should also only be used as an indication of what is likely to happen in the flat in real life, as there is a misconception among some consultants and professionals that what happens in the model is exactly what will happen if a fire breaks out in the proposed flat.

Based on BRE’s extensive experience with large-scale experimental fires as well as investigations of actual blazes, we have found it extremely unlikely that any model can predict the exact location of a fire initiation event in a building; it can only be a representation of an agreed scenario.

The aim of the analysis is to derive the available safe evacuation time and compare this with the required safe evacuation time, a standard method of demonstrating compliance with the Building Regulations. By comparing the two, the BCB can see whether occupants are likely to escape before conditions in the flat would prevent this.

BRE offers a unique approach that is based on probabilistic modelling, which is quicker than the CFD method. It models thousands of different combinations of fire locations, fire sizes, internal flat layouts, occupant escape times and other factors in the time that it takes for a single CFD model to be run. This allows BCBs to understand with greater certainty what is likely to happen in a flat. Probabilistic analysis of this kind served as the basis for the NHBC research that in turn formed the foundation of BS 9991.

BCBs are being approached with an increasing number of open-plan apartments by fire engineering consultants and architects. It is likely that this trend will continue as foreign investors keep on funding developments in the UK and try to get the most from their money. So what still needs to be done?

There is plenty of demand for duplex and large open-plan flats that fall outside the scope of the current guidance. It is recognised that the guidance cannot cover every layout eventuality; however, multi-level apartments are an area worthy of further research to assess whether they can be developed without the need for costly and time-consuming CFD modelling in each case.

Should open-plan stairs in dwellinghouses be a feature that developers wish to pursue, further research is also needed to assess whether the installation of a residential sprinkler system can provide an equivalent level of safety to that of conventional homes with a protected staircase.

Experience tells us that CFD modelling will almost always show that, in the event of a fire, visibility in a flat fails any of the consultant’s specifications – the amount of smoke generated by even a small fire that is enough to activate the sprinkler may also be sufficient to fail the visibility tenability criteria. Further work is needed on how this actually affects the occupants’ escape time and the CFD modelling tool should, if possible, incorporate the direct interaction of the sprinklers with the smoke layer to take the effects of the former into account.

Last of all, the addition of sprinklers to these open-plan designs is essential to offset the absence of a protected entrance hall and to keep the fire to a low intensity, allowing occupants the opportunity to escape safely. Statistical information on the reliability of residential sprinklers in the UK is currently lacking. Nevertheless, it can be expected that this situation will improve over the coming years – at least in Wales, where all new and converted single-family dwellings, including houses and flats, are now required to have a residential sprinkler system installed.

Dr Chris Salter is a fire safety scientist at BRE