Ensuring structural resilience in the event of fire is key to the safety of people in or near a building.

In England and Wales, the minimum legal obligation is requirement B3 of the Building Regulations, which says that in the event of fire, ‘stability will be maintained for a reasonable period’.

Prescriptive guidance and codes, such as the Department for Communities and Local Government’s Approved Document B and the BSI’s BS 9999 Code of practice for fire safety in the design, management and use of buildings  provide a simple means of defining the structural fire resistance requirements for straightforward buildings.

The codes recommend a fire resistance period commensurate with the likelihood and consequences of structural failure due to such a fire, with a view to minimising risk across all buildings. Isolated elements of the structure are then typically designed and/or protected so they would pass a standardised furnace test of corresponding duration.

Although these steps have been features of design for decades, their origins and their applicability to a particular building are rarely interrogated. Given that guidance has not evolved greatly since Post-War Building Studies no. 20, Fire Grading of Buildings in 1946, and the furnace testing regimes are even older, the appropriateness of prescriptive fire resistance measures for modern buildings is increasingly difficult to ascertain. In the face of a rapidly evolving built environment, there is a need to scrutinise the means by which the minimum legal obligation is achieved.

Fire resistance is a measure of the performance of an isolated construction element under defined furnace heating conditions – commonly referred to as a ‘standard fire’ – relative to the specific performance criteria of integrity, insulation and load-bearing, according to the nature of the element.

The load-bearing fire resistance of a structural element is the test duration after which it reaches a notional deflection limit of span divided by 20 – for instance, a sag of 300mm at the midpoint of a 6m-span beam – although this was principally introduced to prevent damage to testing rigs rather than set an acceptable performance threshold.

The need for standardised fire testing arose in the USA in the early 20th century when ‘fire-safe’ buildings came to be expected after several significant conflagrations – most notably the great fires of Baltimore and San Francisco, in which numerous buildings were entirely destroyed.

The fire-resistive principle developed momentum as materials that were proclaimed to be fireproof – largely inert materials such as steel, iron or concrete – subsequently took over the construction market without any significant evidence as to their actual performance in the event of fire.

In an effort to assess the comparative performance of such materials and products independently in the most severe possible fires foreseen at the time, the first concepts of the standard fire test emerged (see Figure 1). 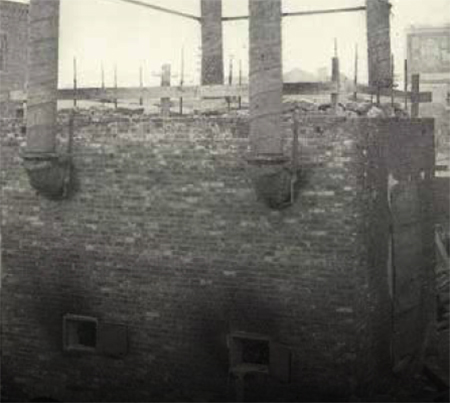 The heating regime adopted in early tests stemmed from New York fire codes, which were informed by firefighters’ qualitative experience. With a peak temperature of 927°C, the testing regime was, at the time, intended to be more severe than any envisaged real fire. Following some criticism and debate, a consensus was reached on a new fire test standard in 1916, which is largely still the basis of test regimes used today (see Figure 2). 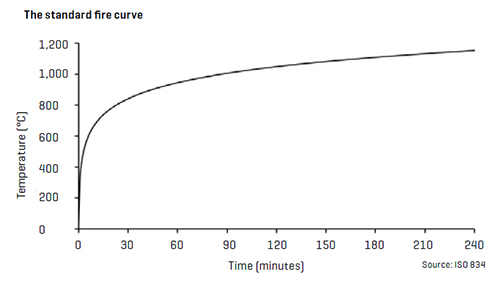 The concept of expressing fire resistance performance objectives in terms of time did not emerge until the late 1920s. In recognition that the heating regime of the ‘standard fire’ did not correlate with those noted in real fire scenarios, an attempt was made to relate the severity of real fires to standard durations of exposure to fire. In the process, correlations between fire load and required fire resistance were devised, resulting in the early manifestations of the fire resistance periods applied in design today.

For the remainder of the 20th century, various practitioners and researchers highlighted that fire resistance had little if any correlation with how an element, not to mention the overall structure, might perform in any particular fire. This is because:

The primary purpose of fire resistance testing, therefore, remains consistent with as providing a means of comparing the performance of construction elements.

Successful fire resistance fulfils the statutory obligations, meets stakeholder goals and is completed within the project’s constraints. These factors can be considered in the context of the overall project or in terms of fire resistance design.

In the face of a rapidly evolving built environment, there is a need to scrutinise the means by which the minimum legal obligation is achieved

Project-wide goals may include the architectural vision, building functionality or future flexibility. From a fire resistance perspective, the goal may be to achieve the minimum performance required by the Building Regulations. However, there is often an aspiration for a higher degree of resilience, enabling, for instance, operational continuity.

Overall constraints may be budgetary, concerning the programme or existing building or site conditions. In fire resistance design terms, the constraints primarily relate to how fire may manifest. Depending on a building’s design and use, real fire events will vary in nature, as will potential consequences for the structure.

Fire resistance design effectively comprises the measures adopted in ensuring that a building’s structure remains stable for a reasonable period. For simple buildings, where life safety is the chief consideration, adopting a prescriptive recommendation may be most appropriate. However, the validity of this approach relies on three key prerequisites:

This should be framed in the context of current construction trends. Taller buildings are increasingly common, but such a scale is not consistent with the origins of most prescriptive guidance. Cellular spaces are less common, and contemporary architecture delivers large interconnected spaces. Sustainable design is also influencing material choice.

As a result, fire resistance guidance and the test methods on which it relies are often applied to materials that behave very differently to the inert ones originally in mind.

Finally, structures are more complicated. Large, open, connected spaces make greater demands on structural engineers and lead to more creative approaches, such as long-spanning transfer structures, cellular beams and so on. Standard testing and prescriptive design guidance did not envisage such modern features at their conception.

It would be reasonable to suggest that what the construction industry perceives to be common in terms of the context of prescriptive fire design guidance is increasingly less so. The limitations of prescriptive design are likely to become ever more apparent as its boundaries are pushed. At best, blind application may result in uneconomical fire resistance design that hinders innovation and sustainable development. At worst, a building may perform inadequately.

Those involved in fire resistance design face some tough questions. Is the ‘one size fits all’ approach that originated in the 1800s still appropriate? Should there be recourse to prescriptive methods without question, regardless of their scope of application? Or should designers, where appropriate, demonstrate performance by alternative means?

As far as the building control community is concerned, can all designers be relied on to act competently? Amid what is often a multitude of competing project goals and constraints, and as prescriptive fire resistance design remains the norm, the answer will generally be no.

As lead approvers, however, should building control bodies force the issue? Without applying unnecessary levels of scrutiny for scenarios that are clearly simple, should they, where appropriate, challenge designers to demonstrate safety by means commensurate with a given project’s complexity? Unless they do, it is not a given that the life safety requirements of the Building Regulations will always be achieved.