Over the past 16 years, the urban population of the UK has experienced an increase in excess of 5m people, and similar to this pattern, other cities around the globe have been growing, with approved construction in New York City up 180% from 2014 to 2015 to allow for a larger population. With this influx of people comes an unavoidable rise in the number of tall buildings in close proximity, limiting space available for the natural drainage of water.

Most rainfall events in the UK comprise less than 5mm of precipitation, and can be controlled adequately by traditional systems. However, with the increasing frequency of extreme rainfall due to climate change and increased urban migration meaning less space for natural drainage, buildings now require engineered features, both to attenuate and discharge or re-use rainwater and to protect citizens from flooding.

In open countryside, 95% of rainfall makes its way into the ground and drains naturally, with only 5% contributing to flooding. This is in stark contrast to urban areas, where these figures are reversed: 95% of rainwater in cities has nowhere to drain and will potentially cause flooding.

In response to these issues, the government has in recent years introduced legislation that is designed to identify new ways to manage surface water via drainage systems. The UK Climate Change Risk Assessment: Government Report, published by the Department for Environment, Food and Rural Affairs in 2012, identified flooding as the most significant risk across UK cities, both currently and in the short-term future, with water availability assessed to be an increasingly significant pressure.

This has in turn led bodies such as the Construction Industry Research and Information Association (CIRIA) to find evidence supporting the importance of surface water run-off attenuation.

Sustainable drainage systems (SuDS) have long been on the agenda, with CIRIA’s own SuDS manual first published in 2007. The principle has evolved and gained in popularity over the past decade, with governmental bodies and manufacturers alike developing a greater understanding of how such systems can be incorporated into building construction to maximise their benefits. November 2015 saw the revision of CIRIA’s manual to incorporate the 'four pillars of SuDS' – water quantity, water quality, amenity and biodiversity. 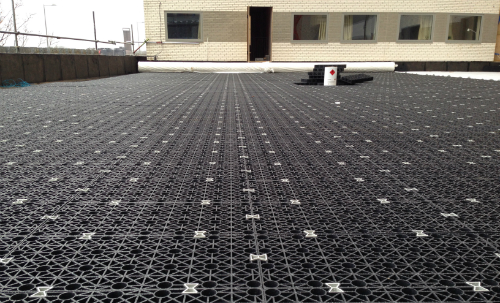 The manual emphasised that SuDS should be fully integrated into the design of urban buildings as an early consideration. One way of doing so in city centres, where space is limited, is the use of podium- or roof-level rainwater attenuation and green and blue roofs.

Blue roofs are specifically designed to store and control the flow of rainwater, intercepting it at source and reducing peak flow by using flow control outlets. Blue roofs can be open water surfaces, which offer storage in a porous media or beneath a surface in a proprietary modular geocelluar system.

Temporarily storing excessive amounts of rainwater using specially designed retention materials, blue roofs prevent such water from reaching already overwhelmed sewers until the system has the capacity to handle it. The water can be managed through a flow control outlet at a rate agreed by the property developer and water companies.

Green roofs are, in contrast, covered with vegetation and a growing medium, planted over a waterproofing membrane, and incorporate building drainage and irrigation systems. By slowing the rate of rainfall to the drainage system and storing and attenuating water, green roofs can provide many benefits for city centres.

As well as preventing urban areas from experiencing flooding as a result of excessive rainfall, green roofs encourage biodiversity; they enable the planting of seeds and local vegetation, all sustained by rainwater stored in the green roof. This in turn provides a habitat for wildlife, mainly birds and insects, increasing biodiversity in our city centres.


Without the expensive excavation of ground or surrender of underground car parking space, there is no room to store rainwater at ground level in urban areas.

Human Settlements, Infrastructure, and Spatial Planning, a report from the Intergovernmental Panel on Climate Change published in 2014, observed that an increase in green spaces, including green roofs in city centres, not only regulates storm water and prevents floods but additionally offers benefits such as reducing air pollution, establishing recreational space, providing shade and cooling, and enhancing wellbeing.

There is also evidence that the re-use of water stored by green and blue roofs can also locally reduce the urban heat island effect by removing heat from the air through evapotranspiration.

In areas where the space available is not limited, rainwater can be stored at ground level; however in city centres, space is at a premium, so this is often not an option. Without the expensive excavation of ground or surrender of underground car parking space, there is no room to store rainwater at ground level in urban areas.

The capture and attenuation of water at roof or podium level allows this water to be harvested and re-used in the building itself. Car washing, toilet flushing and laundry facilities can use rainwater stored by blue or green roofs, reducing a building’s use of potable water. When required, stored water is treated, and can be re-used to irrigate green roofs in dry spells, and for amenity and biodiversity.

One such project where this approach has been taken is Unite Students Stratford ONE. Located near the Queen Elizabeth Olympic Park in London and adjacent to Westfield Stratford City shopping centre, the project provides accommodation for more than 1,000 students across 28 floors.

A practical rainwater attenuation system was developed to manage the site’s storm water drainage requirements in the event of a 'one-in-100-year' storm event with an additional 40% capacity as a safety margin. As is typical with city centre buildings, the site has restricted external ground area to incorporate a large, buried attenuation structure.

A two-tiered Permavoid geocellular attenuation system at podium level collects rainwater run-off from both the building roof and podium. The discharge is conveyed via flow control outlets into a 30m3 buried attenuation tank,constructed with Polypipe Polystorm geocellular units, at a rate of 42 litres/sec.

Consisting of lightweight, 85mm-deep modular cells that can be interlocked to create a load-supporting raft, the Permavoid Podium Deck intercepts water and integrates source control into the overall SuDS scheme. Incorporating the podium deck into the scheme allowed the design process to begin at roof level. Such water-efficient equipment and control of surface run-off can earn several BREEAM points for the sustainability of a building design.

Climate change and flash floods are an increasing risk to city centres across the world. With a clear lack of space for natural drainage, it is of paramount importance that building control surveyors look at different ways to preserve and protect urban areas, citizens and their homes from storm water damage.