One in four UK buildings is at risk

Nearly all buildings are economic assets that should also be healthy places to occupy; but they are at risk if not treated properly. Such risks often arise, however, because of a lack of understanding and inappropriate treatment rather than as a result of insufficient investment.

Traditional buildings make up about a quarter of UK stock and most surveyors will therefore come across them at some time. They are also at greatest risk because we treat them as if they were modern structures.

Categorised as those built before 1919, traditional buildings have a permeable fabric and therefore usually solid walls; modern buildings comprise impermeable layers of construction that can have air gaps and membranes to prevent and control the movement of moisture.

Most traditional buildings perform well until they fall into disrepair and suffer adverse intervention. This means that when problems such as dampness are observed, we should be investigating the cause rather than installing vapour barriers. If we do so, the problems remain hidden, often returning and perhaps causing even greater damage.

Understanding building defects is a surveyor’s function, but when it comes to dampness many delegate that responsibility to a damp-proofing contractor, which often results in chemical injection damp-proof courses (DPCs) and cement renders. This may be common practice, but is not best practice.

Best practice instead means following BS 7913: 2013, which gives authoritative guidance on how to deal with traditional and historic buildings. Section 6.3 emphasises the need for understanding a structure’s performance and building pathology in making well-informed decisions about treatment. This would provide sufficient understanding to ensure that any proposed works are both technically feasible and beneficial.


Traditional buildings are categorised as those built before 1919, of permeable fabric and usually with solid walls

Section 6.10.1 of BS 7913 states that dampness is often caused by the external ground levels being higher than the internal floor levels or by the insertion of modern non-porous materials. Such materials can include DPCs and membranes, cement render, cement mortar repointing and impermeable solid wall insulation (see image 1).

Installing vapour barriers will trap moisture and could cause any timber present to rot. It could also result in increased heat loss; BS 7913 states in section 5.3.1, on sustainability, that: 'Elements such as walls can be over a third less energy-efficient if damp'. Trapped moisture also lowers the wall’s temperature, which means that there can be situations where the lower surface temperatures can result in condensation, particularly where internal areas have been partially treated with a new internal render, thus forming a thermal bridge.

With such obvious disadvantages to treating dampness with moisture barriers that are cited as problematic by authoritative guidance, it is difficult to understand why surveyors would recommend damp-proofing contractors without identifying the cause themselves. It must surely be in the interest of sustaining buildings and their owners that surveyors recommend the most appropriate treatment.

Of course, many professionals end up surveying buildings that have been inappropriately retrofitted or ‘improved’, which may then present challenges. It should be relatively easy to survey traditional buildings that have not been altered or have hidden defects, but these are few and far between.

Most have received a series of alterations involving impermeable materials; many may not exhibit any problems on inspection – especially if they have just been refurbished – doubtless resulting in a clean bill of health. However, the survey process can highlight potential problems, often as a result of impermeable materials being incorporated in and on the building fabric.

In surveying such buildings, common forms of inappropriate repair work include cement rendering, especially when it has been brought down to the ground as it bridges any DPC present (see image 2). If there is no evidence of internal dampness, be aware that it still could be lurking underneath the internal cement render, trapping moisture and potentially causing all the invisible problems mentioned previously.

Many other types of work trap moisture in the building fabric and prevent it from evaporating; for example, replacing suspended timber floors with concrete incorporating polythene damp-proof membranes directs moisture in a concentrated form around the perimeter, which is when it rises up the walls. The common solution for this ‘rising’ dampness is the installation of chemical injection DPCs and internal cement render. The remedy is to remove the concrete floor and its membrane.

Today, surveyors are also faced with buildings that have been retrofitted with energy-efficiency measures, such as solid-wall insulation, and it is important to understand how this changes the hygrothermal performance of the building and the dangers to which it leads.

Any solid-wall insulation should be of a permeable kind, but even that may carry risks. Consider the weather exposure zone in which the building is located. UK weather exposure zones are derived from an assessment of the distribution of wind-driven rain and detailed on a map in BS 8104: 1992, and also in Approved Document C of the Building Regulations for England and Wales. Structures in exposure zone one do not carry the same risks as exposure zones three and four, where external wall insulation could become affected by prolonged and persistent heavy wind-driven rain. These again cannot be readily seen, but being aware of them enables an understanding of the possible consequences. 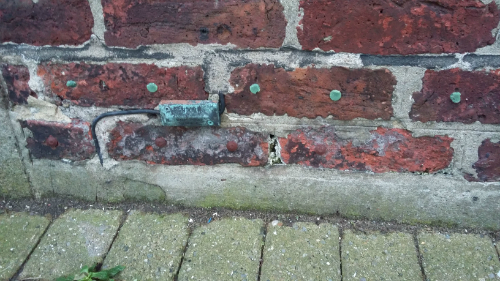 Figure 1: Three retrofitted DPCs have been installed, two of a chemical injection type and one electro-osmotic. However, the property is still suffering from dampness rising around the edge on the internal retrofitted concrete floor, high external ground levels and moisture trapped by use of cement mortar pointing 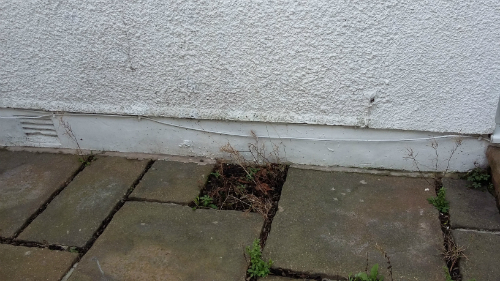 Figure 2: Cement render typically cracks, which allows moisture in, but the relatively impermeable nature of the render prevents that moisture from evaporating. The render brought down to the ground causes dampness to rise and bridge the DPC

Thermal bridging occurs in all traditional buildings to some degree, but the risks could be much greater. If the area in the void between floors and ceilings has not been insulated, then the whole horizontal strip could act as a thermal bridge and therefore result in moisture concentration.

From a technical perspective, endeavouring to return a traditional building to its original performance would be the most desirable solution. However, it takes a good understanding of building pathology to appreciate the knock-on effects of undertaking some works to achieve this rather than others.

It is not usually feasible to restore a building to its original performance for practical and economic reasons, but there are many technically feasible solutions to problems such as dampness that do not involve impermeable materials. These include lowering external ground levels, replacing cement render with lime, or replacing cement mortar pointing with lime mortar and existing concrete floors with ‘limecrete’; these are all cost-effective solutions that need to be carefully detailed and are not normally associated with the work of damp-proofing contractors.

Understanding the problems and solutions associated with traditional buildings is not – or should not be – a specialist activity. All surveyors need to be aware that they should always delegate such structures to the experts who understand them.

John Edwards FRICS is Director of Edwards Hart Chartered Surveyors and lead author of BS 7913:2013 - Guide to the conservation of historic buildings