A question of physics

Building professionals often propose using water-resistant coatings to protect walls of masonry and other permeable materials, especially after devastating events such as floods. So why are conservation specialists opposed to them?

Traditional buildings are actually very good at keeping out the rain, although they do this in quite a different way to modern construction, which relies instead on waterproof materials such as sheet metal, glass and cement. The effectiveness of materials such as stone, timber, brick and lime mortar lies in the very fact that they are water-permeable – that is, they have an open and connected pore structure through which water can travel.

The difference between water vapour and liquid water is critical: in a vapour the molecules are widely separated and move independently, too light to be affected by gravity; but in a liquid they are close enough to bond ionically, flowing as one and entraining any other water with which they come into contact.

There is a continual exchange of moisture between permeable building materials and the air surrounding them, which is driven by changes in the exterior humidity and the way moisture moves through the pores.

The pores will almost always have a lower vapour pressure than the surrounding air, essentially because water molecules travelling into the material condense as they collide with the pore walls, or are held by contaminants such as salts and clays. Pores may connect to form fine capillaries, and these can fill with water even when many larger pores are mostly dry; capillarity will then cause this water to flow through the material. Together, these processes draw in water vapour from the air. In contrast, if a liquid-filled capillary connects to the surface, it may lose water to the air through evaporation.

When a raindrop hits the surface it is not instantly absorbed, unless it should chance to hit the mouth of liquid-filled capillaries, which can entrain the water into the material. More usually, air in the pores prevents the water being absorbed. A sponge provides a perfect analogy: if it is dry – that is, its pores are filled mostly with air – it will not absorb water very readily.

The likelihood of two consecutive raindrops hitting the same spot is vanishingly small, even in a severe storm, so there is never enough water to overcome the air resistance. Most rain will therefore rest in the surface pores until it evaporates, rather than running down the surface. The big problem with waterproofing is that flowing water will instantly be drawn into any crack or joint by capillarity.

Traditional construction also incorporates details such as eaves, hood mouldings and footings to protect weak points where water might collect and be drawn into the wall, though maintenance remains critical to its performance.

If a coating is applied to a permeable material, it will have little effect on the amount of water vapour drawn in because the physical processes in play are easily strong enough to overcome even a very thick coating. However, any coating will greatly reduce evaporation, meaning that, over time, moisture in the wall increases.

When rain hits a coating that reduces the surface roughness, it will run down until it reaches any flaw and there be drawn, or ‘wicked’, into the wall, as does flood water. The coating will prevent that water evaporating, so moisture levels will again increase over time. 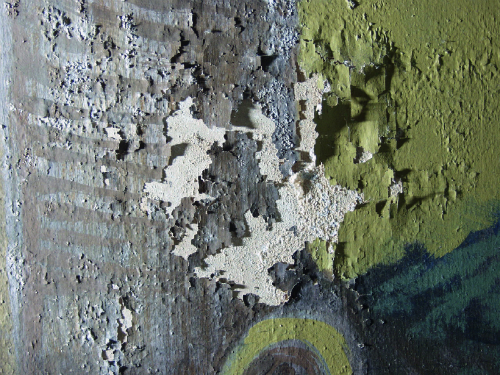 Figure 1: Even ordinary paints will reduce evaporation from a permeable material. If water enters from elsewhere, the result can be flaking, powdering and spalling of the subsurface

Perhaps the most important point is that rain hitting the surface is not the only source of water. Collecting in blocked gutters it can enter the wall at the top and be drawn down by gravity, while all surveyors know the problems of failed downpipes and drains. Water escaping from mains or internal plumbing is another common problem, and high internal humidity can lead to serious condensation. Whatever the source of water, the coating will hamper drying.

With time, a coated permeable material will start to fail, usually at the point where it alters the permeability, since it is here that salts will tend to be deposited and air trapped. It is very common for the entire surface to begin to spall away. Walls given waterproofing treatments all fail sooner or later – sometimes slowly, but often quickly and spectacularly.

The lesson is that treatments need to be tested outside the lab, and for longer periods. It is not enough to show that a coating can slow initial water uptake: other consequences need to be investigated, especially over the life of the building.