Australia's national location information provider, PSMA Australia, is determined to record data about the country's built environment. It is an enormous undertaking, given that Australia covers a land area of some 7.6 million sq. km – 3/4 the size of Europe and 32 times the size of the UK. To tackle this challenge, PSMA is applying emerging technologies to develop an initiative called Geoscape and address the problems of scale and scope.

Location intelligence has the potential to drive innovation across many sectors of the economy, from logistics and marketing to urban planning, emergency management and service delivery. Most recently, the ability to visualise the built environment has enabled the development of a number of 3D city models that provide high-quality detail. The desire for a greater level of detail and resolution has also seen the use of point cloud data, which is enabling the development of small-scale but high-resolution analytical models.

However, Australian models often record very specific and often quite small geographic areas, such as the central business districts of our major cities. There is relatively little information available for the rest of the continent.

While its population is small, Australia's cities cover huge areas, with Melbourne being around the same size as London or Paris, and Perth covering the same area as Berlin. And although most of the population is found in the urban areas that sprawl along the coastline, we have a critical need for better information about the built environment in our remote communities to ensure that all Australians have access to the services and facilities they require. However, the costs associated with existing techniques for expanding the coverage of these models, as well as their ongoing maintenance, remain prohibitive.

PSMA Australia Limited is an unlisted public company owned by the country's 9 federal, state and territory governments, and was formed in 1993 to collate, transform and provide location data as national data sets. Completely self-funded, PSMA continues to provide a means for governments to collaborate on national geospatial matters under Australia's federal system.

Location intelligence has the potential to drive innovation across many sectors of the economy, from logistics and marketing to urban planning, emergency management and service delivery

For more than 20 years, PSMA has been aggregating, standardising and providing high-quality national location-based data sets. These include fundamental information such as geocoded addresses, roads and transport data, land parcels and administrative boundaries.

In recent years, we have seen interest in and appreciation of this information extend well beyond the geospatial community. In 2016, the Australian government recognised its value to the development of the digital economy and, via a commercial arrangement with PSMA, negotiated open access to 2 key data sets, the Geocoded National Address File (G-NAF) and Administrative Boundaries. This means that Australia is now one of a handful of countries where geocoded addresses are openly available at no cost to the end user.

PSMA is currently leading the development of Geoscape, an initiative to record Australia's observed built environment and anchor it in a reliable geospatial base. We are collaborating with Australian federal, state and territory data custodians and working with major technology suppliers including DigitalGlobe, which specialises in earth imagery, information for remote sensing and feature extraction.

Every address in Australia

With the development of Geoscape, PSMA is seeking to provide a greater understanding of what is present, in terms of buildings, their attributes and land cover, at every address in Australia. The new data set will also include tree heights and record key features of the built environment such as roof materials, swimming pools and solar panels.

The key features of Geoscape are:

Geoscape will provide a comprehensive view of the location, distribution and characteristics of more than 15 million structures across Australia by combining the following technologies and techniques:

Geoscape uses DigitalGlobe's WorldView-3 satellite-based sensors – a multi-payload, super-spectral, high-resolution commercial platform with 31cm panchromatic resolution, 1.24m multispectral resolution and 3.7m SWIR resolution – to collect up to 680,000 sq. km worth of data every day. PSMA is also applying Tomnod, DigitalGlobe's crowdsourcing geospatial intelligence platform, to help identify features such as swimming pools and solar panels. While Geoscape will provide similar data to small-scale 3D models, albeit at a lower accuracy level, its data sets are designed to support analytics at the continental level.

PSMA tested the Geoscape concept with a pilot in the Sydney suburb of Chatswood in August 2015, moving on to focus on the Adelaide region and covering some 16,000 sq. km. This phase included just under a million building footprints, with associated attributes and relationships.

PSMA is now rolling out Geoscape across Australia to provide full coverage of the continent by the end of 2017. We will be applying 3 categories in relation to data quality and potential capture timelines. Each has been developed based on a number of factors, including the probability of factors such as flooding, population distribution, industrial or commercial activities and the ability to verify positional accuracy.

For the base release of Geoscape, regions with more precise data have been defined as "urban, those with a lower risk value have been defined as "rural balance", while the term "remote communities" is used to define areas of interest to record at high-quality attribution but low positional accuracy (see Figure 1). The urban category will cover more than 90% of the population. 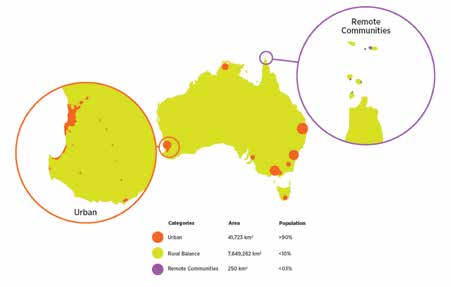 Various digital elevation models (DEMs) and digital surface models will be used during the development and maintenance of Geoscape, and a national 30m DEM will be provided. It will be developed continually with an annual maintenance cycle, new attributes being added according to market need and data availability or recording options.

PSMA will provide geospatial data in a range of industry-standard formats and also enable access to aspatial data through web services that are Open Geospatial Consortium-compliant. The data set will offer insights that can be applied in different environments and in different software, thanks to links with PSMA's national location data sets that extend the depth and power of Geoscape by using G-NAF and Administrative Boundaries.

As well as an Australian Information Industry Association innovation award, Geoscape won a Geospatial World Excellence Award in May and is attracting significant international attention. Many countries are interested in its potential to fill geospatial information gaps; in particular, it could support the UN's Sustainable Development Goals – helping establish key economic infrastructure such as addressing and land registration systems – and improve humanitarian and natural disaster relief delivery.