Japanese knotweed: why do surveyors need to be aware?

Invasive non-native species (INNS)cost the UK economy around £1.7bn a year through loss of crops, damage to buildings and infrastructure and harm to biodiversity. The Wildlife and Countryside Act 1981 made it illegal to allow such species to spread, but when originally enacted only two terrestrial INNS plants were listed: Japanese knotweed and giant hogweed. The list was expanded by an amendment in 2010 and there are currently 39 terrestrial, freshwater and marine plants listed, with more to be added soon. Nevertheless, Japanese knotweed remains a particular concern for surveyors, who should take appropriate care when dealing with the potential risks that it poses to property.

Japanese knotweed is essentially a large mass of underground root growth called a rhizome system. This lives on year after year, remaining dormant over the winter and emerging as annual shoots above ground each spring and summer. In the growing season, the plants capture energy from the sun through photosynthesis and store it as biomass in the rhizomes, which then use this for new growth. 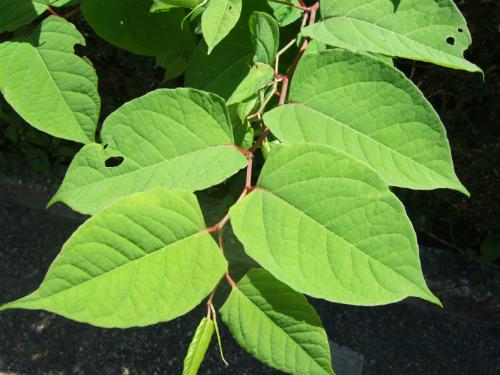 This results in an extensive root system that can spread several metres from the stems and penetrate a few metres into the soil. A simple analogy would be to imagine the rhizome system as an iceberg, where the relatively small mass above ground belies a much more significant mass beneath.

The main identifying features of mature Japanese knotweed plants are:

Many other plants have a similar leaf shape to knotweed, so that should simply be an initial identifier. If a plant has woody or solid stems that are bendy or do not snap easily and if the leaves are arranged opposite one another along the stems then it is not Japanese knotweed.

Why knotweed is a problem

New knotweed shoots can spread a long way underground, exploring areas for cracks and openings into which to grow, searching for sunlight. Once in a crack, the expanding growth can exert considerable sideways pressure that can, over time, significantly damage built structures, tarmac and hardstanding. 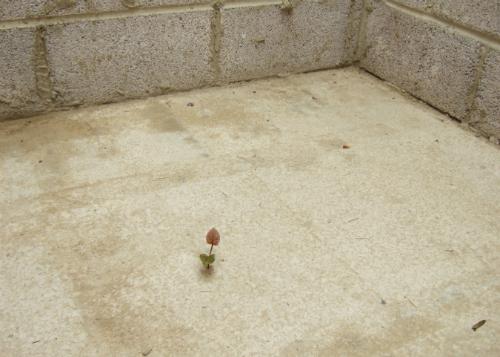 Rhizome fragments are also easily excavated and spread when soil is disturbed at what would seem a considerable distance from the stems above ground. Indeed, the spread of knotweed in the UK after its introduction in the mid-1800s has been almost entirely as a result of rhizome fragments in contaminated soil.

Given that a female plant alone was originally introduced here, Japanese knotweed does not readily spread by seed in the UK. It is therefore testament to its invasive nature how rapidly it has colonised much of the country – and Europe and North America, for that matter.

Perhaps as a result of adverse press coverage in the mid to late 2000s, surveyors were increasingly noting Japanese knotweed on their property surveys. Trying to understand the risk the species posed, lenders approached the then unregulated knotweed treatment industry and were overwhelmed with the confusing array of advice they received. As a consequence, lenders took a highly cautious approach and many homebuyers were unable to secure mortgages wherever there was an inkling that knotweed might affect a property. 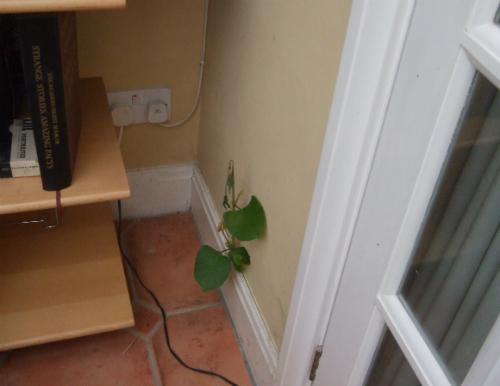 This led the Council of Mortgage Lenders and the Building Societies Association to approach the industry again for a solution. The RICS produced the information paper Japanese knotweed and residential property, 1st edition, in 2012 with an addendum published in 2015, while the Property Care Association (PCA) established the Invasive Weed Control Group, which now sets the professional benchmark for knotweed control firms.

The 1981 act focuses on tackling INNS impacts on ecology and the countryside. The recent review of INNS policy in the UK and Europe, however, seems to agree with the industry and has identified knotweed as a special case, where the issue is one of the impact on people and property rather than on ecology.

Although the Infrastructure Act 2015 and the EU Invasive Alien Species (IAS) Regulation 2014 are designed to combat INNS, guidance from the Department for Environment, Food and Rural Aairs is that this legislation is inappropriate for dealing with knotweed in residential areas. Knotweed isn’t even on the list of Species of Union Concern under the IAS Regulation, because its ubiquity across Europe makes specific efforts to prevent it spreading very difficult.

In 2014, reform of antisocial behaviour powers made it possible for community protection notices (CPNs) to be issued against anyone unreasonably having a detrimental effect on those nearby due to INNS. The supporting Home Office guidance makes specific mention of Japanese knotweed, the species against which the new power has mostly been directed. For instance, a whole street in Coventry was recently issued with a CPN, as was a homeowner in Peterborough who initially refused access to their garden to allow treatment of knotweed affecting the adjacent owner.


It is important that all surveyors realise that Japanese knotweed can pose a significant and costly risk, which is why lenders have been so wary of it.

However, by far and away the most active area of legal action is civil litigation. Knotweed has a blighting effect that can significantly affect property transactions: the diminution in value can be very large indeed, with property prices falling by between 5% and 20% as a result of knotweed. The knotweed does not even have to be located at the property in question, as in the Peterborough case; the RICS Japanese knotweed information paper applies the higher-risk categories to all knotweed within 7m of a property, regardless of boundaries.

The liabilities associated with a single property transaction are wide ranging. Consequently, the defendant in a litigation case could be:

It should be no surprise that it is the surveyor, with their safety net of professional indemnity insurance, who is often singled out as the soft target in such litigation, where those more culpable but less likely to pay out are absolved.

The lesson for RICS members is that, whenever they carry out a survey, they should be mindful of the reasonable surveyor test and ensure that they collect evidence, such as photographs, to show why they did not record knotweed on a disputed site. A reasonable defence could include:

It is important that all surveyors realise that Japanese knotweed can pose a significant and costly risk, which is why lenders have been so wary of it. However, the mechanism for quantifying and managing this risk, put in place by RICS and the PCA, should effectively solve most knotweed problems.

That being said, there is a burgeoning litigation market, which means that surveyors need to be on their toes with regard to potential knotweed impacts on property. As such, it is vitally important that surveyors fully consider the risks and collect evidence to support the reasonableness of their surveys. This could simply involve taking photographs or including caveats that limit their liability when growth is obscured or cleared away, for instance in winter.

You can also significantly help your case by familiarising yourself with the RICS and PCA knotweed guidance and using online tools such as Plant Tracker and various other knotweed plant identification services.

Paul Beckett is a director and owner at Phlorum

Download a complete “Japanese knotweed: why do surveyors need to be aware?” PDF