Should you be seeing red?

Stewart Little looks at infrared thermal imaging, a not-so-new but underused tool in the surveyor’s kit

Infrared thermal imaging technology has been around for nearly a century. It has a multitude of uses, ranging from medical science to military and police operations, and in the building surveying world it can be employed to detect defects and energy deficiencies, informing decisions on the maintenance of built assets. This article explores the technology, thermal colour interpretation and the benefits for building surveying.

What is infrared thermography?

Infrared images have been around since John Logie Baird demonstrated his camera at Box Hill in Surrey in 1929. The device was huge, needed liquid nitrogen to keep it cool, and was not exactly the last word in style and practicality. Nevertheless, it paved the way for where we are today. Things went digital in the 1990s, and camera prices have fallen year on year as economies of scale are brought to bear. Nearly 100 years on, the physics are the same but the cameras are infinitely better: they are smaller, portable, better performing and, of course, cheaper.


Everything above absolute zero (that is, –273.15°C, or 0 kelvin) has energy. The more energy something has, the more its molecules move; the more they move, the more they radiate.

While similar to normal cameras, IRT cameras are able to ‘see’ in a different wavelength, capturing a different part of the electromagnetic spectrum. Infrared energy is all around us, emitted by every object you can think of, and IRT cameras pick up this energy from excited, animated molecules. The detector in the camera is sensitive to radiated energy in a certain wavelength in exactly the same way that a digital camera is sensitive to visible light. Infrared radiation is invisible to the naked eye, however.

Water offers the clearest example of this principle in action:

A modern IRT camera can detect that energy radiated by an object and turn it into an image that is visible to the naked eye. When the button is pressed on a thermal camera, the thermometers it contains record the temperature in front of them; today’s cameras typically have around 76,800 thermometers.

The result is what is called a thermal picture displaying an array of colours, all signifying differences in energy absorption and loss. This makes for an invaluable tool when you want to ascertain the condition and performance of property stock. 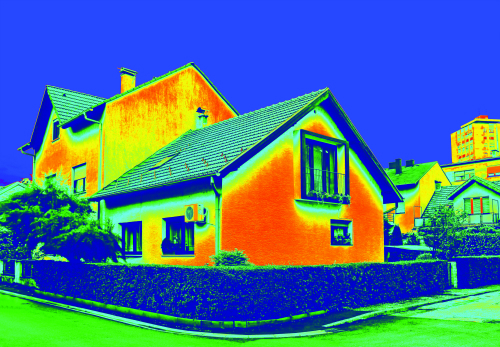 Figure 1: Infrared image of a house

Every time a picture is taken, that temperature data is stored. The image can be interrogated and manipulated for a variety of purposes.

Consider a thermogram of a house: this may often show, for example, red or white windows, green walls, blue render or yellow timber cladding. Each image has several parameters that can be modified digitally – among others, distance to object, humidity, emissivity, level and span – all of which affect how the camera visualises the temperature of the object.

In general – although not always – red means hot and blue means cool. Red on the outside can mean a damp house or missing insulation, for instance, although the same problem might appear blue on the inside.

As has already been suggested, the use of IRT in different sectors is on the rise.

For building surveying applications, IRT is ideal for detecting energy deficiencies and building defects, and so it is increasingly used in conflict resolution where there are claims of poor workmanship. Specifically, IRT surveys are used to detect water ingress, condensation, draughts, porous brickwork, delaminating render and slumped insulation.

An IRT survey can establish all sorts of building defects, in, for example:

IRT is most commonly used to assess housing stock and make informed decisions about potential retrofitting by quantifying the images and detecting energy deficiencies. By using it before and after retrofitting, visual evidence can be provided as to the quality of workmanship and improvements. At the time of built asset disposal and acquisition, IRT therefore comes into its own to provide a clear visual assessment of the property portfolio.

A crucial factor in the successful use of IRT as a surveying tool is the weather. The best atmospheric conditions for thermal imaging surveying are after sunset, with little wind and no rain, fog or mist. When surveying houses, the heating must be on inside; when surveying a roof, it must be after a sunny day. As emphasised above, it is all about energy and how it escapes from an object.

As an aside, it is worth noting that – contrary to popular belief – even if a thermographer can see someone inside their house while taking an IRT picture, the picture itself will not show this, because infrared radiation cannot pass through glass. So taking images of the house in the twilight will not mean that its inhabitants are photographed; in fact, the thermal picture is more likely to reveal the thermographer with their equipment. 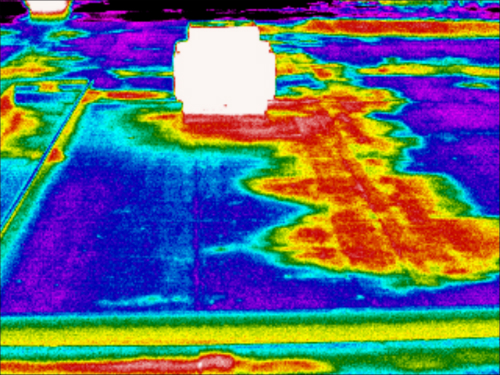 Figure 2: Infrared image of a roof

IRT is not new, but it is increasingly being used as a building surveying tool to assess a large portfolio of properties rapidly and impartially and make informed decisions about their refurbishment. Although the advantages are numerous, the most important ones are speed and cost-effectiveness.