Despite several decades of discussion on diversity and inclusion, wider representation of women in the workforce has still not been achieved. The stubbornly low numbers of women in project and programme management reflect the overall low levels of women in construction, technology and other male-dominated professions. We frequently point to the engineering and IT basis of the profession as relevant determining factors, but often overlook the wider cultural context of women in society.

The Association for Project Management (APM)'s Women in Project Management group was set up 23 years ago by a group of men and women keen to 'increase the number of women' in the profession. There is unfortunately no baseline data to measure progress, but the following proportions of female employees in different sectors paint a certain picture:

These numbers reflect the historically low attraction rate of the various sectors and show that they are certainly not the top career choices for women. The visibility of the few female employees in these industries has not always been great, and career advice appears limited. Retention is also an issue, with women leaving their jobs for reasons such as:

UK construction skills shortages are predicted to have an impact on the industry’s performance by 2020. Today’s debate is couched as a 'war for talent', and the skills or talent shortage has several aspects.

Nearly 40% of UK project professionals are aged over 50 (source: Arras) and will retire in the next decade or so. Almost a quarter of UK surveyors are in a similar position (source: RICS). Construction- and property-related professions are not attracting enough young or new employees to replace those due to retire, and the recent growth in the economy has only further exacerbated the current and likely future skills shortage.

These issues have many implications at a time when the work environment is more technology-driven, reliant on agility and focused on sustainability. The lack of a suffciently diverse workforce is contributing to the skills shortfall and hindering the sector’s capacity to respond to growth.

In time, skills shortages affect wage costs, stretch resources and could lead to less-qualified people making decisions that may jeopardise the quality and increase the cost of projects (source: Atkins). Organisations without inclusive practices lose out on the benefits arising from diverse teams, are less likely to reflect client and stakeholder perspectives, and will probably be less competitive and innovative.

Figure 1 outlines a holistic approach to enhancing diverse talent. It addresses leadership and other key elements, and requires internal and external collaboration. Success requires changes in mindsets, including confronting unconscious bias. This is the only way to ensure the working culture is transformed to attract and retain diverse talent. A unilateral approach will not work for women. 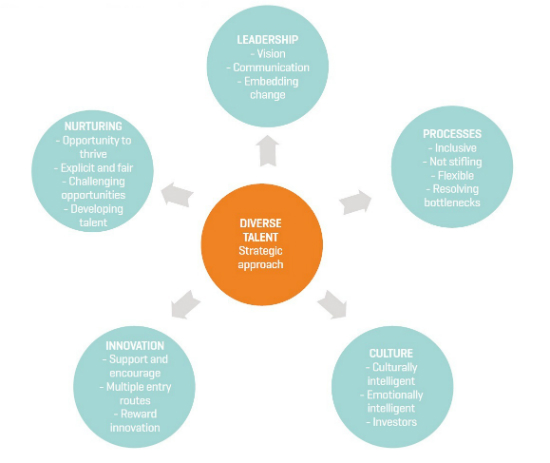 Returnships, a US concept, create a bridge back to work for experienced women after career breaks of 2 or more years, and typically last 10–12 weeks. In the UK, Thames Tideway Tunnel is in the second year of its returner scheme, which is supported by outsourced coaching provision, and it attracts a range of skills in project management, site engineering and quantity surveying.

A leading architectural practice is also participating in this process, with support from an external recruitment agency, and is helping to create flexible working opportunities for people with previous architectural experience. The practice extols the calibre and conscientiousness of staff recruited through this route, while women who participate overcome the CV gap problem, have a clear route back into work and are given a trial period to review their decision to return.

Hiring and retraining non-cognates to acquire the skills and qualifications of quantity surveyors, project managers and so on is more commonplace for larger firms such as Rider Levett Bucknall and Faithful+Gould. However, small and medium-sized firms can increasingly benefit from this practice. Non-cognate recruitment adverts should explicitly welcome applicants with generic qualifications as training will be provided, which may include sponsored postgraduate qualifications. Another approach involves offering technical support to returnees for an initial period.

Higher-level apprenticeships have been particularly successful in project management and are used by several engineering employers, such as BAE Systems and Transport for London. Employers have to reconsider the wording and placement of their adverts when trying to recruit women and other diverse talent across a range of ages. Some employers such as Arup have also widened the pool of universities from which they seek recruits.

Retaining female employees requires a range of initiatives such as:

Firms that appear in The Times Top 50 Employers for Women, such as Arup, Atkins and EY, all have such approaches embedded in their practices. Women’s networks exist in other organisations such as Carillion and Lendlease, and these offer workshops and informal networking and mentoring opportunities.

Support from senior management for initiatives is also paramount, with the leadership team itself reflecting or working towards greater inclusion.

Small and medium-sized enterprises account for more than two-thirds of construction-related organisations, and any initiative that is not embraced by them is unlikely to succeed. Widespread uptake of the RICS Inclusive Employer Quality Mark should foster improved inclusion, while the APM has included diversity and career-break questions in its annual survey to help benchmarking and future strategy development. The Construction Industry Council also recently published A Blueprint for Change on diversity in the sector, and this contains some interesting case studies, while the government is introducing legislation to make larger employers publish pay and gender parity data from 2017.

Every organisation has to embrace the diverse skills that women represent

Inspiring Women is a campaign that arranges for professionals to visit schools to inspire the next generation. Women in Project Management encourages its members to join this initiative, and last year it produced a film and associated factsheet for 11–21-year-olds to promote project management as a career. RIBA has launched a Role Model initiative including a wide range of inspiring women, while a scholarship launched last year at the Saïd Business School for an MSc in Major Programme Management addresses career development and the low representation of women at senior levels.

There is a renewed endeavour across the industry to make a thorough difference on diverse talent and inclusion, with a greater focus on women. While there is also an ethical aspect to this, the impending skills shortage, the implications for project outcomes as well as professional and corporate self-interest are also relevant. To move forward in a coordinated manner and reflect a more holistic approach, every organisation and individual has to embrace the diverse skills that women represent.

Teri Okoro is a director of Toca Architects, Chair of Women in Project Management and a member of the CIC Diversity Panel