One flue over the cuckoo's nest

Chimneys are often deemed to be things from the past, but they are still widely used and there is resurgence in the use of open fires, wood-burning stoves and gas appliances. They are very exposed to the elements but often overlooked because they are difficult to survey – they can also be the nub of many property problems.

This pressure will fluctuate depending on wind conditions and the height and proximity of adjoining structures, and its impact is often underestimated. High-pressure zones are an example of why surveyors should take a wider view of a building’s location, not just its construction.

Conversely, low pressure causes insufficient draw of air up the flue, which can happen if this becomes too cold. This often occurs on stacks that project from the building or where a flue is blocked. The air within the flue should be warmer than external temperatures if it is to rise. High and low-pressure zones can both result in excessive dampness inside the flue.

Chimneys are often deemed to be things from the past, but they are still widely used and there is resurgence in the use of open fires, woodburning stoves and gas appliances

A vulnerable part of a construction is where the slope terminates at a stack projecting through a roof. Water runs down the slope and hits the rear upstand and flashing of a back box gutter, before it is diverted lower. Any defective back box or flashings (or blockages caused by moss, airborne detritus or plants) can mean water backs up, penetrating under tiles and into the base of the stack.

Older stacks are often constructed with thin outer walls (115mm) and without any damp-proof course at their base. These are vulnerable to rainwater penetration, especially where mortar has eroded.

Chimneys projecting through the roof ridge are very exposed to the elements. The flashing between the abutment of the ridge and the stack is a critical detail, often failing due to weathering and mortar erosion.

Flashing materials are predominantly lead or zinc. Solar gain will cause differential movement between metal flashings and masonry, particularly if south-facing. This continual expansion and contraction, exacerbated by frost action, will eventually weaken mortar joints until they fail where the metal is let into the stack. Figure 1: The most vulnerable part of a thatched roof is where the stack intercedes the roof line. If the mortar deteriorates where the metal flashings are let into the masonry, heat and sparks can escape through the stack’s thin walls and the thatch may catch fire

Hard Portland cement, often used for pointing, can become brittle and fails much more quickly than traditional softer and malleable lime mortar. Air-entraining agents are sometimes added to mortar to increase its frost resistance. These create and increase the amount of tiny air bubbles by 10%-20% over normal mortars.

Mortar failures due to sulphate attack, frost action and weather erosion can also lead to movement of the stack, especially in windy locations. In extreme cases, stacks may collapse.

The chimney stack is usually the last thing that is regularly checked and maintained, but should be one of the first things surveyors consider

Open chimneypots can become blocked with birds’ nests and may allow rainwater penetration down to the ground floor, sometimes evidenced by soot spots and staining on the hearth.

The crown is a vulnerable part of the stack, but difficult to inspect from the ground. Some are pronounced but others may be flatter in their curvature. Weathering and frost action can cause a breakdown of the flaunching (the cement covering the top brickwork that holds the pots in place), creating cracks that allow water ingress.

In older properties, flaunching would have been in lime mortar. In modern buildings, or those with successive repairs, harder Portland cement has been used and may have similar problems to pointing, as mentioned earlier. Historically, properties in industrial areas have been prone to higher levels of sulphates in the air. Over time, any rainfall containing these pollutants would damage brickwork and masonry. This is similar to the corrosive effects of salty rain in coastal locations, which accelerates the deterioration of renders and mortars as well as metallic elements, particularly sacrificial zinc flashings.

Any metal objects (e.g. TV aerials) on chimneys make them more attractive to lightning strikes. This risk is increased if the building is tall or on high ground. I have seen the effects of lightning hitting lead flashings, which travelled down a metal valley gutter, along cast-iron gutters and down rainwater pipes until it eventually earthed, splitting all the metal rainwater goods.

Condensation may happen if the flue is partially blocked or fireplaces have been bricked up without venting. In addition to products of combustion returning into a property, e.g. smoke and carbon monoxide (CO), inadequate air-exchange rates mean flue gases can condense when warm and moist CO hits a cold flue.

CO is difficult to detect because it is odourless, colourless and tasteless and easy to inhale accidentally. It is produced when fuels do not burn fully. When a fire burns in an enclosed room, oxygen is gradually consumed and replaced with carbon dioxide; this prevents fuel from burning fully and releases CO.

CO detectors will help to alert homeowners to dangerous levels, but may have a shelf life and need renewing. Although not required in a private home, properties owned or managed by landlords must be serviced annually by a registered Gas Safe engineer.

Regular sweeping of flues used for coal and wood-burning fires is necessary to avoid a build-up of soot and other deposits. Often overlooked by owners, surveyors should always ask when a flue was last swept by a licensed chimney sweep.

Acidic build-up can cause extensive damage in upswept flues especially where dampness becomes an issue, leading to a breakdown of the internal parging, brick and/or stonework. In more serious cases of deterioration, dislodgement and failure caused by acid attack, older flues have to be completely relined.

This risk is increased if gas appliances are installed without a proper chimney liner or dedicated gas cowl on the chimneypot and the fire is just vented into the cavity.

Wood-burning fires can deposit soot and creosote salts on the flue lining, which can lead to serious damage to the chimney parging. When combined with moisture, these deposits can turn into sulphuric acid, and will contain isomorphous sulphates, chloride and nitrate ions (once only associated with rising dampness) among other mineral deposits.

In Victorian and Georgian houses, wood or coal fires helped to keep stacks dry and any water ingress would have been dissipated by regular use of the fireplace. Fires were also important for mitigating the effects of moist air inside a property. Bricked-up fireplaces and double-glazing can now hermetically seal in moisture and buildings can no longer ‘breathe’ properly. Most dampness in old chimneys occurs in stacks that project on all three sides from an outside wall.

The configuration of a chimney is quite complex. The throat (the area just above the top of the visible hearth) should be gently curved and higher sections may be offset. Flues are generally narrow and easily blocked.

Flue parging is a lime-based render and vulnerable to moisture and heat. The constant heating/cooling cycle of fires, together with any moisture, may eventually cause parging and its underlying brickwork to deteriorate until they break off and become stuck on any angles and offsets in the cavity.

Any bridges across the cavity can lead to condensation, allow moisture transfer and restrict the flow of gases up the chimney. This is more likely if the stack is on an external wall because it is more exposed to rainwater and extremes of weather.

Chimneys have sometimes been repaired with square or cylindrical clay liners, often similar to underground drainage pipes. Because chimneys are usually offset, the butt joints of these rigid pipes may easily be misaligned, as would clay inserts using interlocking ‘tongue and groove’ pieces. 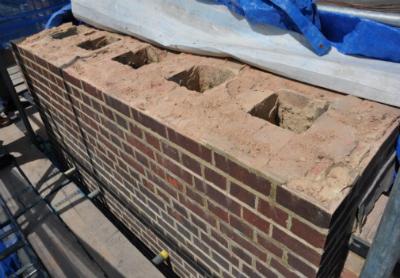 Figure 4: A 1940s end flank wall projected stack. The walls around the flue and ‘withes’ (partitions between flues) are robust at 225mm. In older stacks, these are often only a half brick thick (115mm) and so more vulnerable to rainwater penetration.

In these cases, misalignment and the resultant gaps between liner sections can create leakage paths and affect the upward draw of air, resulting in condensation and an escape of the products of combustion when the fireplace is used.

High-pressure zones can be negated by extending the height of the chimney stack so it is approximately 1m clear. Low pressure can be addressed by installing cowls onto chimneypots to counter the effect of downdrafts (these will also stop rainwater ingress and birds nesting). They can also be negated by checking there are no physical blockages within the cavity, especially at the throat, and ensuring the air in the stack (particularly if it is external) remains warmer than the outside air.

The Lead Development Association recommends an external polysulphide mastic sealant to replace mortar where lead or zinc is let into a stack. This takes up the differential expansion and contraction movement without failure.

Sulphate-resistant mortars are available that have a lower tri-calcium aluminate content and thus a much lower alkali level. Inhibitor additives mixed with mortar containing natural zeolite also resist sulphates. Flashings should be let into the mortar by a minimum of 25mm and properly wedged, using either a polysulphide mastic or lime-putty mortar. Mortar course repointing should be undertaken on older stacks using lime-putty mortar and finished with a ‘bucket handle’ profile to increase resistance against rainwater penetration.

Chimneys may also be relined. A large rubber ‘condom’ is inserted down the flue then inflated. Fast-drying cement is poured around this insert, which is then deflated and removed, leaving a new rifle-barrel flue that will prevent water penetration and allow the smooth exit of the products of combustion.

Often the tallest structure in a location, most church steeples have a lightning conductor attached. This could be a useful addition to tall properties with high, exposed chimney stacks.

The chimney stack is usually the last thing that is regularly checked and maintained, but should be one of the first things surveyors consider. Because chimneys have both internal and external parts, surveyors should not look at a building in isolation but consider the surrounding environment.