The exponential expansion in the use of unmanned aerial vehicles, or drones, is transforming the way a wide range of industry sectors conduct their business, none more so than the survey community.

However, the pace of technological advancement has outstripped the evolution of regulations, an issue that continues to provide challenges to operators who wish to fly in more complex environments to meet the needs of their customers.

The majority of those entering this new sector have little or no experience, many simply being established professionals such as surveyors, inspection engineers, asset managers, agronomists and archaeologists. The principles of operating a drone are new so each organisation must learn quickly.

Although initially slow to recognise the benefits, the survey community is now embracing drone technology

Across Europe, each country has broadly similar regulations, although the transfer of qualifications and operating permissions between states is not harmonised.

The UK Civil Aviation Authority (CAA) has adopted a ‘light touch’ approach to drone regulation, with the aim of finding the line between managing risk to the public while enabling the industry to grow.

Two years ago there were 260 organisations certified to operate drones in the UK, with 1,600-1,700 qualified remote pilots. Now there are 920 organisations, and with 10 more being approved each week they could number 2,500-3,000 in another two years.

To become certified, a company must obtain a CAA Permission for Aerial Work (PfAW), which allows the holder to work for commercial gain and also sets the operational limitations. The key document in the PfAW submission is the Company Operations Manual, which outlines how flying activity will take place, what drones will be used and the safety principles employed. An organisation must be insured for drone operations.

Pilots must undergo a certification process offered by national qualified entities on behalf of the CAA. They must undergo theoretical training (or demonstrate an acceptable means of compliance such as a private pilot licence (PPL) and a competency assessment, in the form of a practical flying test.

This full certification process is offered by the National Qualified Entities (NQE) that have emerged in recent years to deliver on behalf of the CAA.

The theory element is normally classroom based, over two to three days (although can be as little as one day) and focuses on regulation, airspace considerations, how a drone works, how to set up a flying site, conducting pre-site surveys and risk assessments.

The culmination is a flying test, during which the candidate is given a representative flying task and demonstrates their ability to plan, set out a flying site, perform basic flying skills and show how they react to emergency situations to assess their competency.

If successful, the pilot is certified to fly the configuration and weight category of the drone tested. For example, if it was a Phantom 3 UAV, then the pilot could fly four, six or eight engine rotorcraft up to a weight of 7kg. Between 7kg- 20kg, the remote pilot is automatically qualified for the below 7kg category.

The next step is completion of the operations manual, which is submitted to the CAA together with evidence of pilot competency and insurance, and approximately two months later the organisation can expect to be issued with its PfAW.

The vast majority of companies that hold a PfAW are concerned with basic aerial imagery for marketing, inspection and high-end production video.

Although initially slow to recognise the benefits, the survey community is now embracing drone technology as an additional, essential tool in its capture armoury. Sophisticated drone technology means that a survey professional can find it easier and cheaper to get a sensor in a point in time and space to capture the raw data they need.

Drones come in all shapes and sizes, but the class below 20kg make up almost all current certified organisations. They can be rotorcraft (a helicopter with multiple rotors, usually four, six or eight engines) or fixed wing. These fly like conventional aircraft with forward motion generating lift to keep the platform in the air. They can be hand, bungee or rail launched and often employ features such as parachutes to ensure a safe landing.

With safety in mind, all drones must have (and be able to demonstrate) failsafe features that automatically bring them back to their launch point in the event that the radio link between the remote pilot and the platform is lost. 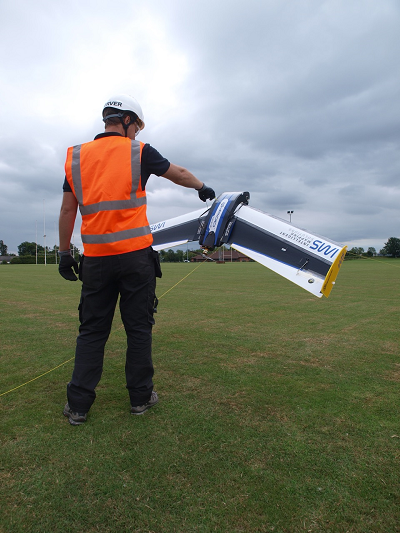 Figure 1: Preparing a drone for flying

The proliferation of drone use means that awareness by the general public has grown and news pieces about near misses with airliners keep them in the forefront of safety consciousness.

The rules enable a remote pilot to operate to 500m radius from the launch position and up to 120m (400ft) above the ground, keeping the drone in sight at all times. A margin of 50m must be maintained from people, cars and buildings unless they have been briefed and pilots cannot fly over large groups of people or congested areas – by definition, villages, towns and cities.

The UK has a high population density (second only in Europe to the Netherlands and Belgium) and a lot of the available work, especially in support of the construction industry, can be found in built up areas. The CAA has recently released the operational safety case concept. This enhanced permission requires the applicant to demonstrate a greater level of safety but could mean an easing of the usual limitations.

For instance, the standard lateral distance of 50m might be reduced to as little as 10-15m if the applicant can show the correct level of risk mitigation.

Only 15-20 enhanced permissions have currently been granted, which puts the holders in a select club of those who can perform work that the vast majority of certified drone companies cannot. In this sector, as in others, it pays to stand out from the crowd.

For surveyors, drones are not the answer to every problem but employed in the right way they fulfil a useful function. And as sensors develop, the future holds some exciting visions.

What about miniature pocket-sized drones that can be taken out and thrown in the air? They could survey a 50ha area in 20 minutes in all weathers with data uploaded to the cloud to be processed and delivered to the client two to three hours after capture – all with no direct human interaction. Perhaps not as far away as you think.