Cast-iron gutters and rainwater pipes, prevalent through the Victorian and Edwardian periods, need paint protection. Unfortunately, painting schemes may miss the inside faces of these goods, which then corrode. Similar problems occur with internal cast-iron service pipes, such as soil stacks.

Connections are vulnerable where flat-roof rainwater outlets meet internal pipes, which often suffer blockages from airborne detritus. In winter, pooling water freezes and can crack the outlet. Either problem may cause water to leak outside the drainage area down the outside of the internal pipe.

Surveying cast-iron goods can be tricky due to restricted access. I use a mirror on a telescopic pole to check the rear of pipes and gutters, but this may be insufficient if problems are beyond the reach of a 3m surveyor’s ladder. These issues are greater in tower blocks, which require safe working access.

When installing PVCU systems, allowing for linear expansion is often missed, causing them to buckle. Expansion is needed on all elevations, especially when south-facing, but following manufacturer’s instructions should mean guttering, pipes and connections are cut appropriately.

Guttering alignment is critical, but falls are often incorrect, causing flows away from the outlet and spillages over the gutter. Some modern systems can be laid level, with outlets designed to create a vortex to draw water out of the gutter.

Drainage design on buildings is vital to properly discharge rainwater. I have investigated spectacular failures where the design has been ‘hydraulically short’ and size, spacing or number of rainwater pipes insufficient. The calculations for correct designs are complex, because they consider factors such as rainfall intensity, roof area, roof angle and parapet wall height.

I saw an example of this on a sports centre, which had a shallow-pitched roof surrounded by a high parapet wall. Unable to discharge water effectively, the box gutters filled, causing water ingress into the building. This was exacerbated by blocked outlets from stray sports balls. Roof access also required a safe working platform but the cost limited regular maintenance.

Tree and leaf litter obviously cause blockages. I know of examples where the bottom section of pipes (particularly when entering a branch drain) was completely blocked and heavy rain caused spraying of water from each joint.

Warning signs: Leaks onto outside walls are difficult to detect, particularly on solid walls when dampness may only be noticed when it has penetrated. There may be no internal signs on a cavity wall. If the cavity is not blocked, leaks may stay undetected for a long period. A good way of spotting leaks is to conduct a survey in heavy rain.

Solutions: Clearing gutters regularly is essential and problems can usually be solved by replacing or repairing rainwater goods. Owners may be reluctant to change the lowest section of a cast-iron rainwater pipe because it is resilient; bicycles may be chained to them, for example. In reality, if the upper sections are defective then so will lower parts, which should be replaced (possibly using modern cast-iron versions). 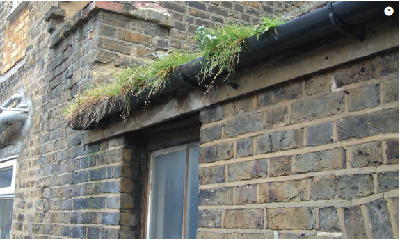 Figure 3: Birds drop seeds onto roofs that collect in gutters and eventually grow, blocking them and leading to an overspill of water, soaking into the walls of the building below the eaves. Rainwater penetration into the habital space will occur where the external walls are solid

Cast-iron pipes can let directly into an underground branch drain, often overlooked in replacement programmes. But if this is defective, water can seep into the ground and building at low level. Branch drains should be part of survey and renewal programmes as they often fail through blockages or frost action.

In the 1960s and 1970s, it was common to run copper heating and other water pipes through solid floors. Denso tape or fibrous wrapping were often not used or poorly applied to protect the bare copper from acidic cementitious floor screeds; as a result they corroded and caused leaks.

When mixed metals were joined, i.e. copper and steel, this caused an electrolytic reaction that accelerated corrosion. Gun metal was once used for joints because it is neutral and breaks these corrosive forces.

In the 1920s, some water mains were made of lead, but galvanised barrel pipes were later often laid, many without wrapping protection. The galvanised zinc coating acted as a ‘sacrificial anode’ in aggressive soils to leave bare steel. The National Physical Laboratory has mapped UK soil types to show those containing metal-eating microbes, which is useful when assessing the likelihood of corrosion. Tree roots and desiccation can also disturb water mains.

Warning signs: A common cause of dampness is leaking water mains. These may undermine foundations or cause overhydration to create heave, especially in areas of London clay. When investigating a property, it is useful to know how mains are routed in different building genres.

In Victorian and Edwardian properties, lead water mains and drains often went under the house (mostly from the front, but sometimes the rear) from the isolation valve outside the curtilage. Leaks could soak into the fender wall of fire hearths (that do not have damp-proof courses) and wick up the chimney breast creating rising damp (but not requiring a retrofit damp-proof course to resolve it).

During the inter-war years, large ‘cottage estates’ were developed after slum clearances. Because these houses were publicly owned, 1 water main and isolation valve typically served a terrace of 4, 6 or 8 properties. Mains would normally be routed alongside the buildings (through a mid-terrace walkway or at the end of the row), through back gardens and then teed-off into the properties.

Solutions: Responsibility for leaks was complicated by the Housing Act 1980, which allowed tenants to buy their council home. The result is mixed terraces of public and privately owned properties with shared water mains. Resolving repair responsibilities can be difficult, because costs are shared between the owners, who blame each other. Knowing the location and problems of these mains is important, because millions of ex-local authority properties above are now held privately. Surveyors may recommend that owners apply to their water provider to install their own separate water main and isolation valve to avoid this shared scenario.

Once armed with knowledge of the building genre, water main routes and any shared supplies, a surveyor can check whether a leak exists. After the usual internal reconnaissance of timbers, a key question is whether an immediate neighbour has also complained of dampness or any sudden drop in water pressure. If so, a leaking water main must be suspected, but where? 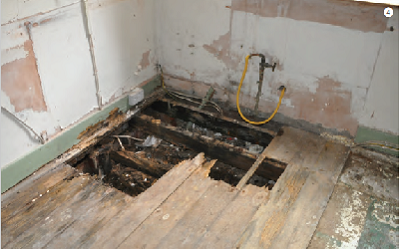 A surveyor may suggest that a leak is investigated by the water company. An inspector will visit the site at night (when water use is low) and use a listening stick on isolation valves. They might ‘hear’ a leak and then use a leak correlator, an electronic sounding device, to pinpoint the location.

Another check is the syphon test. After closing the water main, put the spout of the kitchen sink tap in a full glass of water. If the tap starts to suck the water out of the glass, there is a leaking water main because the water is being pulled back through the tap by an escape of water underground.

Defective water mains are often just locally repaired. However, old pipes leaking in 1 section may well begin to leak in another. Best practice suggests renewing the whole length of pipe.

Chimney breasts are generally wholly internal (on a party wall, usually back-to-back with a neighbour’s); 3-sided (wholly internal with the fourth side on an external wall) and projected (3 sides standing out from the building).

A chimney stack projecting through a roof, where the roof slope terminates at the stack, is one of the most vulnerable parts of a construction. Chimney stacks are usually the highest point of a building, so are very exposed to the elements but often overlooked because they are difficult to survey. A future article will focus on identifying problems associated with chimneys and possible solutions.

Sudden dampness can usually be related to a defective drainage system, caused by tree root penetration, blockages and physical defects. Any leaks can raise the humidity in a building and cause dampness, especially under suspended floors.

Tree root penetration is a massive threat to underground pipes, particularly vitrified, salt-glazed clay pipes but also modern systems (some claim their interconnecting joints are impenetrable to tree roots, but I have yet to see this). Roots may disturb drainage pipes and alter their alignment.

Desiccation may unsettle drainage during long dry periods and cause the ground to move. A water main leaking near a drainage pipe might cause overhydration and heave. In either scenario, where each section of pipe once neatly and smoothly abutted the next, pipes will either split or be misaligned, causing material to collect on these ledges and create blockages.

Underground drainage systems constructed before October 1939 combined foul and surface water all into a single drain, but these sources have or should have been separated. In older properties, everything therefore goes through one drain. Increasing rainfall intensity, bad habits of occupants (such as disposing of plastic nappy liners down toilets) and larger buildings converted into separate flats all mean higher demands on these antiquated systems.

Warning signs: Common indications include a ground collapse or dampness. In Victorian properties where the drainage system runs under the building, there will be foul smells (usually every time a toilet is used) and often high ammonia. These problems often arise suddenly and tend to suggest something has changed in a short space of time. There may also be localised flooding from blocked drains, particularly in back inlet gullies next to the external walls, where rainwater pipes terminate. Blockages can mean back surges with sewage appearing in the bath, hand basins and toilets. There may even be a contaminated flood to the ground floor. Often, blockages occur in interceptor chambers and foul water will bubble out of the top of the chamber, regardless of its depth, together with foul smells.

Solutions: Occupiers should be educated about the impact of putting waste into the drainage system. Other preventative actions include improving the refuse system to allow people to dispose of rubbish more easily.

CCTV camera surveys are becoming increasingly important to understand the state of drainage and identify problems. If tree roots are present inside drainage pipes, all but the severest can be bored out, using a special attachment to allow relining.

With severe blockages, a pneumatic steel arrowhead can be pushed through to shatter the pipe; a new channel can be bored and a drainage pipe pulled through. Excavation and complete renewal may be the only other option.

Surveying buildings for dampness should be a holistic process and surveyors should move from recognising a symptom to diagnosing its cause and source. This series on common causes of dampness illustrates that a failed damp-proof course should be the last thing suspected. It will usually be any one or a combination of these other causes.

Achieving a professional opinion on the source of dampness means improving knowledge and understanding of building failures through the various building genres, and the techniques and equipment used as part of an overall process that is called building pathology.