Back to the wall

Practising party wall surveyors like to think of the Party Wall etc. Act 1996 as enabling legislation. It allows one owner to carry out certain works while at the same time offering the adjoining owner certain protections from the impact that these works might have on them.

The Act has existed in its present form since 1997 but does not differ much from its predecessor, which applied only to certain parts of London. Although initially there were a number of well reported cases seeking to clarify the interpretation, the main ambiguities were largely ironed out by surveyors taking a pragmatic approach.However, the world changes and now surveyors and owners alike are once again challenging the meaning of various sections of the Act.

As a result of this scrutiny, the county courts have lately been providing some interesting decisions. However, until legal precedent is set by a higher court, they can provide contradictory conclusions. So what is the poor surveyor to do?

Taking two controversial issues and considering the virtues of each side’s arguments with associate Paul Gill, the results were interesting.

Building on a boundary

The first discussion related to the interpretation of sections 1 and 8. In one recent instruction, our clients, who owned a yard that abuts the neighbour’s property, had received notice under section 1 from a neighbour wishing to build up to the boundary on their own side. To do so they also wished to have access and served notice under section 8. Interestingly, there is not a party wall in sight or any intent to build one.

You might imagine that this is a simple party wall matter but it is not; the Act (in particular section 1) does not apply where the boundary is already built on. With the presence of a building already on the boundary it seemed clear to us that the Act did not apply and as a result neither did any access that flowed from the notice. The other surveyor disputed this and we agreed to be bound by a third surveyor’s decision who subsequently concurred with me. The neighbour failed to get access and could not build.

Sometime later, and literally overnight, the neighbour took down their building and re-issued the same notices saying that the boundary was no longer built on. The matter was again referred to the third surveyor who concluded that the circumstances had changed and section 1 now applied because there was no longer a building on the boundary. Thus, he also awarded access to construct under section 8.

In hindsight, the surveyors could have foreseen the actions of the developing owner and realised that in the end he was going to get his own way; so why not agree to the first notice avoiding two third surveyor rulings and a heap of fees? Well, the simple answer is we have to apply the rules and if we had accepted the first notice any award made would have been wrong and could have been thrown out if it came under future scrutiny.

My feeling is that something is wrong here; surely those who drafted the Act intended that someone constructing, for their own benefit, a building that sits exclusively on their side should not have the benefit of access over another’s land? There are court rulings but they manage to conflict with each other. Sleep v Wise (2006), decided access over an adjacent property was not permissible for building up to a line of boundary. Kaye v Lawrence (2010) concluded common law rights are superseded by the provisions of the Act implying that access is permissible if notice has been served.

The virtues of both cases, including the non-binding nature of county court cases, were reviewed with my owner who also took legal advice. He was told that there would be a 50/50 chance of a successful appeal to the second third surveyor decision. My owner was at first keen to have the matter considered at court, but when I told him it was likely to cost £50,000 in legal fees he decided he did not want to fund a trial case.

Recently, a panel drafting the latest party wall guidance notes, of which I was part, voted on this and the majority were of the view that access was permitted for works covered under section 1; probably because the judge in Kaye v Lawrence was a high court judge sitting on a lower court.

As my associate says: “It does make a bit of sense, the Act is after all an enabling Act”, and while I have to agree, did it simply enable someone to take advantage? If the Act had not applied, the developer would have needed permission for access and may have had to pay consideration or perhaps move their building away from the boundary to afford access for construction. It still seems a little unfair that my owners needed to put up with the disruption against their will.

In the other issue we debated, my associate explained that his appointing owner’s neighbour wishes to create a basement and is underpinning the party wall with reinforced concrete. This is termed special foundations and requires a neighbour’s consent. My associate has sought agreement from his appointing owner, and recommended consent with the advice that “it is sensible to include reinforcement – it tends to cause less disruption and is more robust”.

My associate’s owner has, not untypically, fallen out with his neighbour, and will not give consent. In response, the owner next door served a fresh notice for raising a party wall in a downwards direction. He argues he does not need consent for the reinforcement because it is not a foundation it is a wall and will have a foundation below it formed of concrete without reinforcement (see Figure 1). 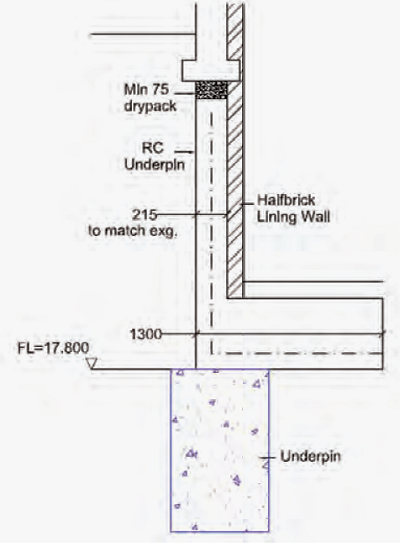 Although this is a matter in dispute and technically for us, the surveyors, to settle, it is not untypical, to attempt to broker an alternative agreement between the respective owners. Therefore in this case, we see whether the owners will agree to the developing owner placing the reinforcement on their land only up to the boundary with just concrete on the other side. We are, of course, aware that the foundation or wall is one unit and according to the Act any foundation containing reinforcement on the land of the neighbouring owner requires consent. Thus, even if that part of a foundation that sits next door is not reinforced, the part on the other side of the boundary is, so it would still technically be a reinforced foundation.

Our suggested agreement worked for this case, but did not conclude whether a downward raising was acceptable. I hear there is a case being heard in a county court that will hopefully bring some judicial clarity to the issue, although this will of course still not be binding as a county court decision.

It seems to me that with changing construction methods, lack of cohesive legal decisions and differences of opinion, surveyors are faced with the unenviable task of advising owners where there may not presently be clear answers. While we should keep up to date with court decisions and take a balanced look at every case on its own merits to advise on what we consider to be the best approach, we cannot always be right.

Where there is no precedent, the best advice is to let the owners decide whether they wish to run the gauntlet of litigation and advise of the likely consequences of focusing too heavily on just one side of argument. We concluded with a note to our national team: “Where there are conflicting county court decisions, advise your owners of both and be prepared to present the virtues of either case” – in other words “sit on the party fence”.

Michael Cooper is Director, and Paul Gill is Associate Director of Building Consultancy at CBRE