How did you first become involved with the Wimbledon Championships?

When I first joined Merton in 1977, the All England Club was considering a scheme to raise the roof on Centre Court to allow the capacity to be increased. We looked at the public safety aspect, and I did a lot of work on evacuation. We realised that the court was a little short on exits, and asked that extra ones be put in, and from that moment on I became involved in all the club's schemes. The roof was raised, and in 1992 it was replaced again. More recently, the roof was taken off once more to install the retractable design you see today. So it is a long history.

What is the difference between a tennis arena and a football stadium from a safety/certification point of view?

At a football stadium you have a partisan crowd who support one team or the other, and there is a lot of rivalry. But at Wimbledon the lawn tennis 'event' is an afternoon tea kind of occasion so the spectators tend to be of that ilk. Visitors also have time to move about and enjoy the atmosphere. The big difference is that you do not need to segregate them. People sitting next to each other may be supporting different players, for example, but there is absolutely no animosity because everyone has just come to enjoy the tennis. Thus it tends to be a safer place to start with. 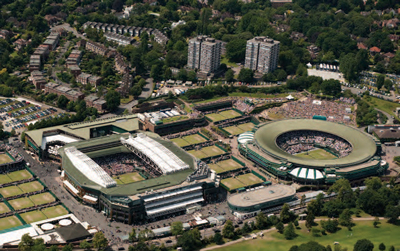 The infrastructure itself is analysed in detail to make sure it is safe both for entry and exit. We have done various exercises over the years to check that the science we used to site the exits has worked.

Only Centre and No. 1 Courts are regulated because they are covered areas seating more than 500 people. But we obviously look at overall responsibility within the grounds, which host the Wimbledon Championships each year. We also check the outside courts including No. 2 and No. 3, which are all designed in accordance with the Green Guide – a bible for us.

Are there any unique features of public safety at Wimbledon that would not apply at other venues?

Yes, because when it is raining the matches are played in a closed stadium and there are the issues of dealing with smoke that could come from an incident. Politically it is also sensitive; security is a very high priority at Wimbledon. Almost everyone going into the ground is checked, along with all bags, using technology similar to that found at airports. This has been stepped up in recent years incrementally as the terrorist threat has got bigger, with an increased number of security checks to make sure Wimbledon remains a safe place.

Do you think building control is the best technical agency/profession to carry out certification duties for such events?

We have responsibilities in the design, so actually just extend this to include safety at sports grounds. The two are so closely allied it is difficult to separate them and I think in most cases building control does have an input. In some places, environmental health is the certifying authority, and in others it is even the chief executive's decision to issue certificates, but the technical side is normally done by building control. At Merton, safety of sports grounds responsibilities sits within building control.

Do you have any input on steward training or numbers at events?

We do, and actually witness the steward training. During the Wimbledon Championships, they use armed forces personnel in all the stairways, who are obviously a disciplined crew and understand the implications of various issues, such as security. But they also have to be trained for the local conditions at Wimbledon, which is always done during the weekend before the Championships starts.

How is building control involved through the rest of the year?

We make sure structures are checked on a regular basis. Inspections are done at least once a week throughout the year because there is always building work going on.

Almost everyone going into the ground is checked, along with all bags, using technology similar to that found at airports

Last year, for example, work was being completed in the basements of Courts 14 and 15 to provide additional accommodation for the ball boys and girls and the press. The club is in competition with all the other international tennis championship events and likes to keep ahead of the game by always increasing the accommodation, but it is not exactly a huge site.

There is also a voluntary ground capacity, which is agreed with the safety advisory group each year, depending on the building work. Sometimes ground capacity has to be lowered to take into account the areas that cannot be used.

Do you have a safety team on site at all events, and which service leads?

The safety team is not on site but normally meets once a year for this venue – this year in February. Building control is the lead safety organisation, and I chair the meeting. We normally go through issues that have arisen from the previous year's Championships, to learn from the cause of any errors that might have taken place. We also look at any alterations taking place that might affect the upcoming Championships, and assess the capacity for the event.

Team members include representatives from the emergency services, such as the London Fire Brigade and St John Ambulance, and personnel from the club who pass on any information they want us to consider. This is a minuted document, made available to the public each year.

Is there any building work in the pipeline?

The big scheme this year is to put a roof on No. 1 Court. There are issues around planning permission and some technical issues to resolve as time goes on. But the officials are very upfront about what they want to do and how they want to do it. The long-term plan up to 2020 is available in a public document, which includes some additional courts, but the big change will be when the roof is put up on No. 1 Court.

The roof will not be completed until 2018 but work will start after this year's Championships. They only have a 39-week period when work can proceed, so it has to be done in bite-sized pieces to avoid disruption to the competition.

One of the big issues to discuss is how to get the 10,000 people in No. 1 Court and the 15,000 in Centre Court away from the courts and home safely should play continue until 11 o'clock in the evening – the normal cut-off time. Negotiations are taking place with the transport authorities on improving the facilities, because a large proportion of the public that attend Wimbledon use public transport.

It has always been a pleasure to work with Wimbledon. Whenever we have requested extra work, they have quite rightly asked "why do we have to do this?" From a regulator point of view it is an excellent discipline, because I do not want the club to do any work that is not absolutely essential regarding safety. I explain the reasons, and they respect that view so now we have a brilliant working relationship. They don’t do much at all without asking the council whether it is all right and I do not want to impinge on what they want to do.

Our joint ambition is to get as many people into Wimbledon to see the tennis as can be safely accommodated. We both have exactly the same philosophy and it works well.