Data source for all?

The Royal Town Planning Institute has initiated a debate on whether a way of mapping key information is needed to plan sustainably for future development. Peter Shand reports

The political buzzword of the past 18 months has been, without a doubt, 'growth'. While the GDP figures for the third quarter of 2012 may have seen the UK officially come out of recession, there is much work to be done. Arguments were raised across the political spectrum on how best to go about this, but a consensus emerged that the route to growth was to pursue it across the country as a whole – spreading the relative success attained in London and the South East.

This was the view taken by Lord Heseltine in his recent independent report No Stone Unturned in Pursuit of Growth on how to improve the UK’s ability to create wealth, and echoed by organisations such as the Confederation of British Industry (CBI) and the Institute for Public Policy Research.

It is in the pursuit of growth that the Royal Town Planning Institute (RTPI), representing some 23,000 spatial planners and the largest professional institute for planners in Europe, began a debate about whether we need a 'Map for England' to provide a manageable way of presenting datasets in an open, accessible way. Such a map would provide a truly joined-up approach to planning infrastructure and services, helping to boost growth and saving time and money by encouraging quicker, better-informed investment decisions.

The CBI has estimated that even before new infrastructure becomes operational, its building can generate £2.84 to the economy for every £1 spent, 90% of which is retained locally – showing how vitally important it is to make sure that these developments are planned across sectors.

Despite the generally recognised need to ensure such a joined-up approach, there is, remarkably, still no single place or data source within government that makes all these maps available to view. Good progress has been made in various areas, but with an overarching framework – a Map for England – policy-makers could make better judgements about how individual policy proposals interact with and affect the development of the whole country. It would increase consistency in appraisal, improve security and resilience, and provide a better understanding of sectoral issues that may complement or conflict with one another.

We kicked off the debate by releasing research commissioned by the RTPI and published by the Centre of Urban Policy Studies at the University of Manchester, showing that individual government departments now have more than 100 major maps for England relating to their policies and programmes, but when overlain on one another they will have unintended consequences for different parts of the country.

It was a major task for the researchers to pull together around 100 policy maps. About one-third of the documents explicitly stated the implications for different places, but two-thirds did not. The research focused on three key policies for growth – the National Infrastructure Plan, Unlocking growth in cities report and the draft National
Planning Policy Framework – and analysed whether they were spatially aware documents.

By overlaying a number of these maps and diagrams, the researchers demonstrated that some policies and programmes, when considered against each other in relation to different parts of the country, may have unintended consequences. The research highlighted many of the issues that the country faces in terms of future infrastructure delivery for telecommunications, environmental issues, housing growth and transport.

By overlaying data about future housing growth and the environmental issues such as water stress or flood risk, one can see how many areas of future high housing growth and flooding are in direct correlation with each other. By looking at the map below, it is possible to see the high levels of flood risk projected for high growth areas near the coastal areas of north Somerset and East Riding. Further complications can be found in the South West, which is projected to see high household growth due to increased business investment in the area and positive economic conditions. 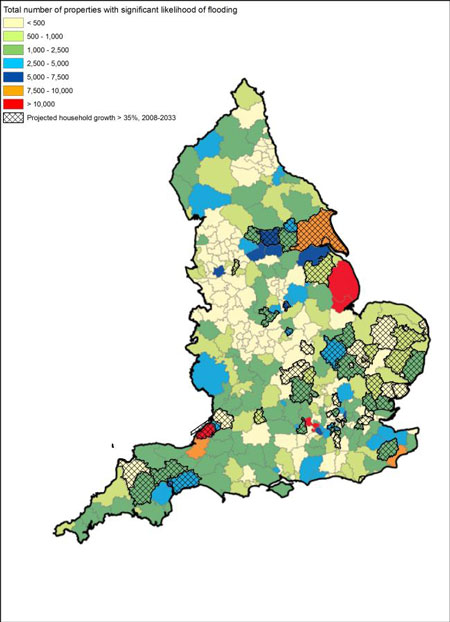 With the growing concern of climate change and the unpredictable natural events associated with future changes in temperature, large-scale housing developments will have to take into account flood risks and water supply issues. Further research showed what happens when future housing projections are overlain on water stress, which highlighted key ways that problems in water supply could impact on future populations. In particular the mushrooming population in the East of England will face severe water stress, an issue that has already affected the area in the past couple of years with hosepipe bans across much of the region.

Open data: The government is committed to its open data drive, and Francis Maude, the minister in charge of reforming access to public information, has described data as 'the raw material of our age'. The Map for England is a way of harnessing this raw material and pushing forward the government’s agenda across departments. It is also about using smart technology and standardised data to foster joint working across contrasting and, often, conflicting, sectors.

Various schemes and initiatives started in the UK over the past few years have shown that members of the public have a great appetite for using data to make conclusions and challenge the information they are given, e.g. mysociety.org, running pages such as theyworkforyou.com, dedicated to sharing public information.

Localism: A Map for England will enable local communities to see and influence government plans affecting their areas, increasing transparency and potential engagement in key decision-making. However, the localism agenda cannot be confused with the need for strategic spatial thinking and guidance, especially for nationally significant infrastructure projects spanning many different local authority areas.

As well as recognition from various sources that the country needs a new spatial vision if it is to grow, a number of programmes towards the end of 2012 highlighted the need for England to consider the ways in which the development of infrastructure will affect the country in the future – and to plan now, in a sustainable fashion, to improve the services that make Britain tick.

One startling revelation was that without any developments to key infrastructure services in the next decade (water, telecommunications, energy, housing and transport), the cost to the country would be £500bn. The stark message was that if the population grows by 10 million people, we cannot 'make do' with the existing services.

What do others think?

Since the launch of the debate in March 2012, the positive response from businesses, communities and the wider public has been encouraging. There appears to be a cross-sector desire for a tool to help users see how a range of national data could affect their areas and development plans. The governing authorities and private and public-sector respondents that took part in the consultation keenly felt that a streamlined, more cost-effective approach to drawing up plans and strategies would be advantageous.

A key message behind recent successful large infrastructure projects in England, such as the London 2012 Olympic Games and High Speed 1 rail route, was the collaboration between all parties to overcome development challenges. A Map for England would help to foster this by helping all parties to pull together using a standardised form of data, ending the tiresome process of different sides arguing over differing statistics and their relative merits.

The RTPI has been discussing the Map for England with various governmental and business organisations, explaining that while conversations about the role of planning in the growth agenda are vital, wider issues surrounding major national infrastructure projects also need to be taken into account.

The institute is especially keen to engage with companies that are key to everyday utility services, such as water, electricity and gas, to find out whether they would find a Map for England a helpful tool. These issues are integral to the future success of development and growth across the country, and need to be planned with an awareness of other influential factors to achieve full success.

What can you do?

Log onto Map for England and contribute to the debate. We want to know whether you think a Map for England is a good idea, and to advise us on what further information should be included on future versions of the map. Also see Twitter, #map4england.