After running 26.2 miles and receiving your well-earned finisher’s medal, you are usually also given a goody bag on completing your marathon. Along with the T-shirt, snack and muscle-relieving pain gel, you will find a shiny, highly reflective space blanket. This helps to keep you warm after you have stopped running – so why not use the same technology to keep your house warm as well?

When the first reflective insulation products hit the shelves of builder’s merchants many years ago there was limited certified testing, so some of their original performance claims might have been a little optimistic. Testing houses in both the UK and Europe also achieved varying results after analysing the products in the same way as they normally would traditional insulants.

So, while test houses and manufacturers agreed on a standard testing methodology for thermal performance – a process that took several years – some companies opted for in-situ evaluation.

It soon became apparent that it was extremely difficult to build ‘standard houses’ repeatedly and ensure that thermal performance and weathering conditions remained absolutely identical, so as to evaluate the true performance of these new reflective insulants with complete accuracy. This caused market confusion and led to many architects, specifiers and contractors not selecting reflective insulation for their projects.

There was now a defined methodology for direct thermal comparison of reflective insulants. This, together with the emergence of the first reflective insulation certificates from the British Board of Agrément (BBA) more than 16 years ago, increased the credibility of the industry and provided consumers with the reassurance they required, and sales started to increase significantly during this period.

All insulation products work by reducing heat flow, which occurs in one or more of three ways – conduction, convection or radiation – with heat always moving from the hot to the cold side.

Reflective insulation’s key feature is, of course, to limit heat flow by radiation. The radiated energy is invisible and causes no rise in temperature until it hits a surface, where it is absorbed and causes the object to get warmer. For instance, radiative energy from the sun will pass through double-glazing, but once it hits an object inside the conservatory it starts to heat it up.

When comparing the performance of reflective insulations, a key technical characteristic to consider is the emittance of the product, more usually described as emissivity – specifically, a surface measurement of the product’s ability to emit radiant energy.

For a typical reflective insulation product, the aluminium foil outer surface would have a declared ‘aged’ emissivity of around 0.05, meaning that the significant majority of energy is not absorbed; it is ‘aged’ because it should represent how the product will perform after many years, rather than just initially. Conversely, for a typical brown housebrick, you would usually expect an emissivity value of around 0.90 – that is, most of the energy is absorbed.

Because emissivity is a ratio of the energy received and reflected, then the temperature and direction of measurement is an important function. Emissivity therefore needs to be measured accurately; the texture of the sample can also have an effect on the true result by scattering the light.

With most reflective insulations, you are determining very low emissivity values and are working at the limits of the instrumentation, so using an experienced independent testing laboratory such as the BBA is essential in order to obtain accurate, precise and credible results. The results supplied should be ‘aged’, to take into account the material’s ability to resist oxidation or corrosion. 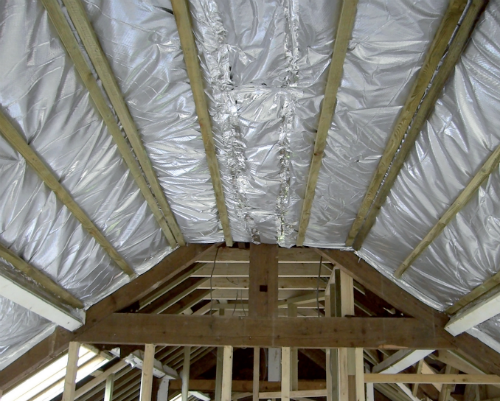 A harmonised European Product Standard is currently being developed for reflective insulation, which is due to be published shortly. Once officially issued, manufacturers will then be able to CE-mark their product to encourage increased sales across the continent.

The BBA celebrates its 50th anniversary in 2016, which means we have been evaluating numerous insulation types – from novel to traditional, in many different applications – for half a century. Each certificate has a scope of use that lists what the product is, its technical performance, how it complies with Building Regulations and where it can be used.

Insulation manufacturers work hard to produce the best product for each specific application, to ensure that all the necessary requirements are met. Obviously, for any insulation the key element is thermal performance, so correct installation is absolutely essential.