Threats to our trees

There has been a significant increase in tree pests and diseases in the last few years, with, for instance, the threat of ash extinction in Europe and the recently discovered tree in Norfolk, named 'Betty', that is potentially resistant to the disease.

The fungus Chalara is present across much of England, and key stands at risk from it include pole-stage, unthinned ash (Fraxinus excelsior) plantations, coppice and natural regeneration.

In such places it is important to thin by 20–30% to increase airflow, which will help prevent a build-up of spores. A vibrant understorey of a range of species, whether naturally regenerated or under-planted, should also be developed to help diversify the stand. In mature stands, it is advisable to remove ash trees with more than 50% of the crown affected by dieback as these are likely to be severely stressed, have limited genetic resistance and will be actively spreading spores.

The threat level for ash dieback is high, as the tree is a hugely significant component of many of our ancient broadleaved woodlands, in particular in the lowlands, as well as being a prevalent hedgerow tree in many landscapes. Current predictions still indicate natural resistance of less than 5%. 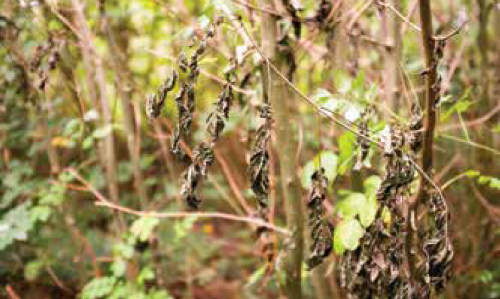 Originating from Eastern Asia, the Emerald Ash Borer (Agrilus planipennis) is a species of beetle that has already killed extensive amounts of ash in northern America following its arrival in packaging material. It should be expected to appear in the UK, and estates and landowners need to diversify their ash stands.

The beetle presents a high threat level; the implications could be very significant, and combined with Chalara this paints an extremely grim picture for the future of ash in the UK.

Although many Phytophthora species are present in the environment, ramorum is of greatest concern. Trees of the genus larch (Larix), particularly Larix kaempferi (Japanese Larch) – a common timber species in the west of Britain and the uplands – are particularly susceptible to the pathogen. Infected stands are given a statutory plant health notice by the Forestry Commission (FC) and landowners are required to fell all trees within 100m of the infection at once to control and prevent further spread.

Infected larch timber is also subject to a movement licence issued by the FC. Phytophthora ramorum has also been found to affect Sitka spruce (Picea sitchensis) and Douglas fir (Pseudotsuga menziesii) in laboratory trials, although no infections have yet been observed in the wild. More recently, Phytophthora ramorum has been observed in Devon and Cornwall on sweet chestnut (Castanea sativa).

Phytophthora is a particular concern that carries a high threat level, since scientists have demonstrated its capacity for rapid evolution through the hybridisation and mixing of genes, giving it the potential to move across different tree species.

This fungus causes premature needle defoliation on pine species – reducing growth rate and therefore timber yield, which can lead to high mortality – and is of particular concern in the lowlands where Corsican pine (Pinus nigra subspecies maritima) is often a major component of commercial woodlands, in particular on lighter soils in the east of Britain. Scots pine (Pinus sylvestris) is also susceptible. The preferred management method is regular thinning to increase airflow and prevent the conditions under which the fungus can thrive.

The threat level is medium, since the fungus is restricted to pine and the timber quality does not suffer significant effects quickly, thus enabling time to harvest.

Suspected to have first arrived in the UK 30–35 years ago, acute oak decline is a condition that commonly affects mature trees.

Those in decline will have vertical, weeping fissures that seep black fluid down the trunk, known as stem bleeds, and some die four to six years after the onset of symptoms. The larval galleries of the native buprestid beetle (Agrilus biguttatus) are usually found in relation to the lesions, with their characteristic D-shaped exit holes identifiable in the bark.

The potential implications of acute oak decline are serious, and the excellent work currently being undertaken by Forest Research, supported by Woodland Heritage, is essential if we are to better understand the causes and develop potential management strategies.

The threat level of acute oak decline is medium, but it is one to watch closely because of its potential impact on such an important tree in the UK. 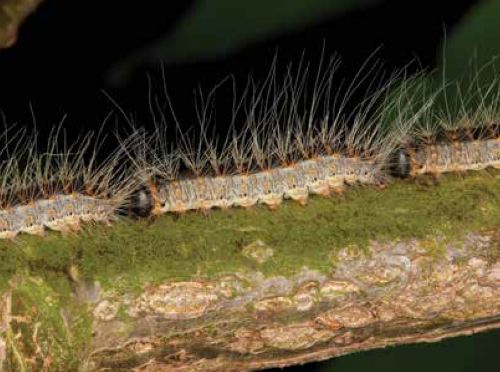 The principal risk from this moth is to human health, as the fine hairs of the caterpillars are an irritant.

This pest is currently restricted to London, Surrey and Berkshire, but is spreading relentlessly. It is extremely important to notify the FC on discovery of the caterpillar. Current management is expensive, and based on manual removal of nests and caterpillars as well as careful application of insecticide in spring.

The threat level is medium, in terms of its implications for timber, but is of critical concern in urban or more populous areas.

This is found on plane trees (Platanus x hispanica) and causes lesions on major branches that can lead to branch drop. This is an obvious concern in urban settings, where London plane is such a critical component of the urban tree resource. Regular assessments should be undertaken and appropriate remedial work carried out.

In terms of its implications for our vital urban trees, the threat level is high.

Other threats include chestnut blight, Asian longhorn beetle and spruce bark beetle, among others.

As with any plant or animal, healthy and vigorous trees have a greater likelihood of resisting threats from both pests and diseases. Good silviculture and positive management are key, and provide critical protection against many threats.

A good financial advisor would always advise having a diverse investment portfolio to reduce risk. This also applies to a good forestry or tree portfolio. A diverse mix of tree species, although more complicated to manage, will help increase resilience to pest and disease threats.

Tree pests and diseases will detrimentally affect timber quality and value. It is vital to manage and survey your woodlands actively to identify any of these at the earliest opportunity.

The FC’s “Keep it Clean” campaign demonstrates the importance of everyday good practice in minimising risks from pests and pathogens. The importance of using good, healthy nursery stock that has traceable sources is also fundamental.

Frequent tree assessments should be undertaken on estates. High-risk trees, such as those over busy roads, should be a primary concern.

The role of secondary pathogens – those that attack weakened trees following an earlier pest or disease outbreak – should not be underestimated either. Some key examples are honey fungus (Armillaria) or Ganoderma root decay.

The tree pests and diseases in this article are not an exhaustive list.

All practitioners working with trees should explore the information on the FC website, while the commission’s Tree Alert app enables you to identify and report any pest and diseases. You should also follow the vital work of Forest Research, which should be supported by all.