Anyone who read about the Rana Plaza factory collapse in Bangladesh in April 2013 would no doubt have been horrified by the needless loss of more than 1,100 lives. RICS was asked by the UK Department of International Development (DFID) to provide staff members to investigate the regulatory failures that allowed the collapse to happen, the first time that a non government body had been asked to participate in a UK government department scheme to provide professional expertise at the request of another government.

My colleague John Tracey-White and myself were asked to form part of the team, which subsequently provided a report to DFID and Rajuk, the Dhaka Development Authority, which is the main authority for development control in the capital. Although at the time of the collapse it was not responsible for the Savar district where the Rana Plaza was located, unsurprisingly it has now been given control of all the metropolitan area.

The DFID report concluded that the collapse was due to systemic failure across the whole development/building control process in Dhaka. The Rana Plaza complex contained clothing factories, a bank, apartments, and several other shops. Ignoring whether the original design was sufficient, the collapse was due to a combination of the illegal change of use of the upper floors from offices to a factory; approval for a further three storeys of factory to an already stressed building and overloading by in-situ generators (required to power the factory) on the roof and internal floors.

However, while the collapse of the building was probably inevitable, the loss of life was not. Cracks in the structure had been observed the day before the collapse and a bank in the ground-floor shopping complex had time to evacuate not only its staff but all the documentation as well. Despite this, the building had been approved for continued use; hence the presence of workers in the factory at the time of the collapse and no issue of a dangerous structure notice.

The sad fact is that Bangladesh has all the legislation and regulations in place for an effective development control system. What is needed is for these to be updated and co-ordinated and for the system to be properly manned and given proper authority to make it more effective. The garment manufacturing industry is the main foreign currency earner for the nation and contributes up to 25% of GDP. The Rana Plaza collapse and the continuing unrest in the garment sector may provide the stimulus needed for reform because it threatens a major part of the economy.

It was clear from our investigations that Rajuk is chronically under-resourced and seems to lack the influence to be able to take effective action. Following the Rana Plaza collapse it has secured approval for the large-scale improvement in staffing numbers to 260, but it was unclear from our discussions exactly what these additional staff might be employed to do, particularly as it now controls the entire Dhaka metropolitan area. 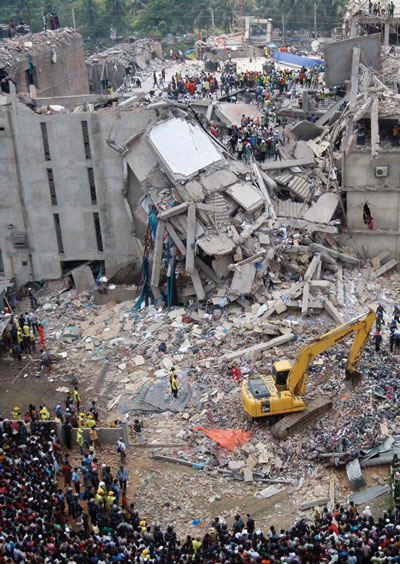 There are also issues around planning control, both the recording of permissions and changes of use and also building control. As a result of our investigation we have recommended the updating of the GIS system to fully reflect the current on-the-ground situation. This will be a major piece of work because the system has not been updated since installation in 2006 and would also have to be extended to cover the new wider jurisdiction. The assumption is that paper records of approvals are in place but probably not change of use. Alongside this would be resourcing and training staff in the GIS system to allow them to keep the records up to date. A mandatory change of use control system with Rajuk approval also needs to be put in place as the Rana Plaza collapse was largely due to the change of use from office to factory.

For building control we recommended training staff who have an engineering diploma (similar to an HND) to become building control officers (BCOs). This would be a new profession in Bangladesh, but our understanding is that the training of diploma engineers would be a good basis for upskilling. With BCOs in place, a statutory role to examine building progress at certain points in the build period could be established. As the leading UK body for qualification in building control, RICS is in a good position to provide advice on curriculum, training and registration; and has already done so for the Israeli government.

We are also recommending that a Bangladesh Building Control Authority (BCA) be established; a proposal that has been on the books for 10 years but never received approval to proceed. We feel that a BCA could keep regulations up to date and also ensure integration of the numerous pieces of legislation and authorities involved in the development process.

Among other findings was the conflicting legislation that is hampering the approval processes. For example, the Bangladesh National Building Code conflicts with the Fire Regulations over the height of fire that the fire brigade can tackle without the need for specialist equipment.

Structural design is generally good but there are flaws in the system that allow it to be abused. There is no requirement for a properly qualified structural engineer to be engaged and no cross check of the design despite the existence of a register of professional engineers managed by the Institution of Civil Engineers Bangladesh. For example, the engineer that signed off the additional floors at Rana Plaza was found to have a false registration. We have therefore recommended that the use of registered professional engineers is made mandatory along with compulsory design checking (proof engineer). This will require the register to be upgraded to include an examination and interview, and expanded.

While this may seem to be shutting the stable door after the horse has bolted, there are still at least 4,500 existing factories whose condition is uncertain. The problem is also being addressed by the major international clothing chains, which were fiercely criticised by the press for using potentially dangerous factories. Their buyers have considerable power to influence how garment factories are examined and ensuring that remedial measures are carried out to bring them into compliance. Those premises not covered by these structural checks will be examined by the Bangladesh University of Engineering and Technology, which is a highly respected authority on structural design.

In conclusion, while the DFID report was focused on the garment sector, which is the largest manufacturing sector in Bangladesh, the principles engendered could and should be applied equally to other significant sectors such as knitwear and leather goods.

There were other areas where we commented, although these were outside our original building control remit, such as the role of the fire brigade in disaster management. While we found that the fire brigade was very competent, probably because its officers are from the military and it therefore runs on military lines, the Fire Regulations were published in 1958 and need to be updated to reflect modern construction and firefighting techniques. They would also benefit from a more risk-based and less rigid list-based system to allow factories that will never meet current code requirements to be certified.

The other area we considered was disaster management more generally. Bangladesh is situated in an earthquake zone and although there has not been a major earthquake in recent times, the potential disaster should not be underestimated. Bangladesh, and in particular its major cities Dhaka and Chittagong, is situated in a river delta, therefore its prevailing soil type is alluvial. In addition, no earthquake preparedness has been undertaken on the existing stock of buildings, i.e. the structural design does not include earthquake proofing. Chittagong, which is Bangladesh’s major port, is also vulnerable to cyclone damage, sea level rise or surges.

Some work is being undertaken by the Ministry of Public Works with the assistance of Japanese experts to survey and retrofit public buildings, but this has only reached the stage of a demonstration project. No retrofitting of non-public buildings has been planned despite the estimate that up to 80% of buildings would collapse in a major earthquake.

We therefore recommended that all structural engineers receive geotechnical training as part of their education or upskilling to ensure that all new buildings incorporate at least earthquake proofing as part of the design process. In addition, advice should be given to Rajuk, the fire brigade and other authorities on the need for a civil defence plan and infrastructure such as places of refuge and evacuation plans.